In this topic we have learnt about  democracy and all about debates and even had some MPs come in to tell us about our topic and we had our own debate about homework should be banned and the majority of the vote was that homework should be banned. We wrote some speeches and we all got a chance to be in the debate and everybody enjoyed the debate and all the MPs coming to in to tell us all about their job and what they do to help the world in a way. We had Mrs Miller came into our class and gave us a rough idea of what the hole debate thing is and then we had Calum Kerr that came in to talk about his job and what he has to do to help then we had Christine Grahame to talk to us about what she had to do to keep the world a safer palace and she also told us about her passion about animals  and how she likes animals and that she has a lovely cat called Mr Smokey. I’ve really enjoyed democracy and I learnt a lot more and now if I become a debater or a member of Scottish parliament then attest I can say I got taught that in p6A and that is why I love this topic so this is probably my favourite topic in p6 so far and by far. We have also learnt a lot about Kim Jong Un and how he always thinks about himself and never anyone else. This has the best topic and I think if I where to become an MP is that I can go and get a cat called Mr Smokey or maybe go to Google and get to try the new VR head set or go to school and tell them about my job and that is why that job as an MP would be the most fun ever.

This block I have learnt about Donald Trump and that he wants to build a wall and certain countries are not aloud to come into America. We have also done debates and i loved them because i got to argue with people and it was fun. I also enjoyed all the visitors coming in. We had Calum Kerr, Muriel Miller and Christine Grahame. I learnt a lot for them. I learnt that Christine Grahame is an MSP and loves animals and she does animal welfare. She said that her favourite part was telling people off because she is the Deputy Presiding Officer and she was once a teacher. Calum Kerr is an MP and he doesn’t like being away from his family all week because he has to go to London for his work. His favourite part is he gets to help people and solve their problems. Muriel Miller did a workshop and I learnt a bit about the Scottish Parliament. Mrs Harrison has also taught us a lot and it was so fun I wish we could carry on this topic. 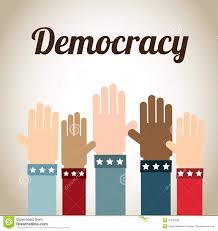 This block was all about democracy and dictatorship. We learnt lots of different things.  During this block we’ve learnt everything from what  laws there are in Scotland to Trumps ban for refugees in Syria.  We also learnt about parliament and our rights and what the government are responsible for. We have done lots of class debates and even made a law on smoking! But my favourite thing was when some people from Scottish  and British government and parliament came to visit us.   Here is an example  of democracy.

For 5 weeks we have been looking at Democracy and Dictatorship , these are the topics that we looked at Trump, Isis, Theresa May, Discrimination, Brexit, Syrian War, Independence, Terrorism, Current Stories and immigration. We managed to look at all of these things. We also wrote speeches and we debated about different things like Homework being banned, Zoos being banned, Junk food being banned in schools, School Uniforms being banned and Video games being banned. We looked at newspaper stories some were funny and some were sad and some were surprises and were more that meet the eye. Calum Kerr came to visit and so did Christine Grahame . Christine Grahame told us about her job. She is really into animal welfare and has a cat called Mr Smokey. We learned about Kim jong-un and his features. Kim jong-un is the Dictator of North Korea. North Korea has not got fair rules or Punishments. Kim jong-un will torture or kill anyone who brakes the rules. We have really enjoyed this topic.

We loved our topic because lots of MSP’s came and visited us. We met Calum Kerr, Christine Grahame. They talked about democracy and told us lots about their jobs but our favourite visitor was Mrs Miller. She made us have a mini vote and we got ballot papers to choose which party was the best. They answered the questions we asked them and it was fun. We also learnt about the right of the children of the world. I felt bad that this was happening to people and children all over the world especially in Asia. It upset all of us to see this happening to children just like us and it made us think how lucky we are. We were so taken aback that people were living in such bad environments and they had to toilet outside. We enjoyed this topic so much that we want to do it again

This  block we have learnt about.  Democracy and people get to have their own say , and they get to Vote for their leader.  We have really  really really  enjoyed doing Debates, they have been really fun because we got to argue for once in our life  at school, we also got to shout across the room and if we argue with Eleanor she would always be amazing at backing up the argument.

Calum Kerr , Mrs Miller ,  Christine Grahame all came into class to teach us about parliament and their jobs.It was really fun and we learnt a lot of facts.

At the start we wanted to learn about

Isis and what they do it is horrible by the way

T May the prime minister of  Britain

Brexit- we have learnt David Cameron resigned  because of this

I have learnt loads!

Next we learned about being an MP and an MSP.

After that a guy named Calum Kerr (he is an MP) came in to tell us about being an MP. I learned that it is really fun but people can be EXTREMELY  rude to you!

Then we learned about all of the political parties!

BLOCK 3 HAS BEEN GREAT

What I have learnt in block three…

In this block we have learnt about democracy and dictatorships. our favourite part about this topic was writing and expressing our feeling in speeches. We also enjoyed learning about Donald J Trump and what he is doing in America. This is what we learnt about him that people don’t like him because he doesn’t listen to the public and he doesn’t think before he speaks. On Friday Mrs Miller came in and talked to us about her job working for the Scottish parliament. Mrs Miller gave us a clickapad each so that when there was a question we could press a button to answer the question. Also Calum Kerr came in to talk to us about his job as an MP, his favourite was that he gets to go to big company’s like Google and try out new things like virtual reality headsets. Calumt Kerrs least favourite part was that people lie about him and that he’s away from his family a lot of the time. Christine Grahame came in to talk about being a MSP. Her favourite part of her job is that she gets to tell people off in the Scottish parliament. She was a teacher before she was a MSP so she was very good at shouting and telling people off. She was also very passionate about animals she showed us a picture of her cat Mr smoky and she got him from a rescue senter. In this block we have learnt many things like a dictatorship,democracy and rights.In primary 6a

I have enjoyed debates the most because we got to SHOUT and argue.My group debated about school uniforms should or shouldn’t be banned and banned won.

Mrs Miller,Calum Kerr and Christine Grahame came in to talk about their jobs and it was great fun Calum and Christine are both politicians and Mrs Miller made us all a little debate and Chris Thomson spoke for new things to get in school and he won over all!!!

we have learnt about Kim Jong Un and the life of a dictator and his country. He is very rich and his country is very very poor.He has over one hundred cars and his favourite car is Mercedes.

We did the rights of a child and we all did different mini posters and I did a right of privacy and your responsibility of the right.