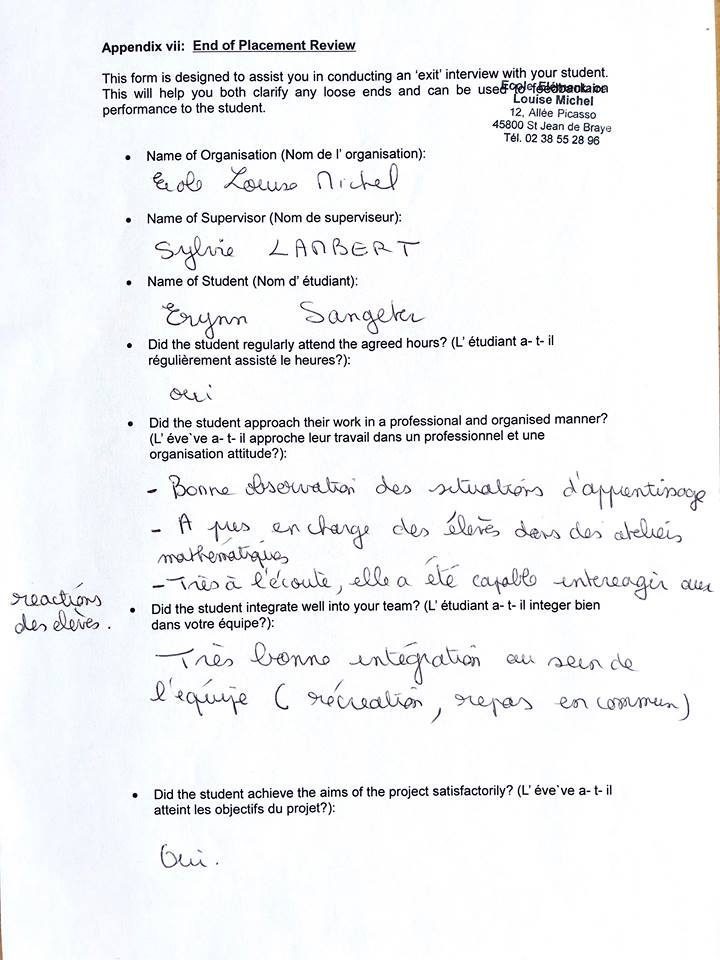 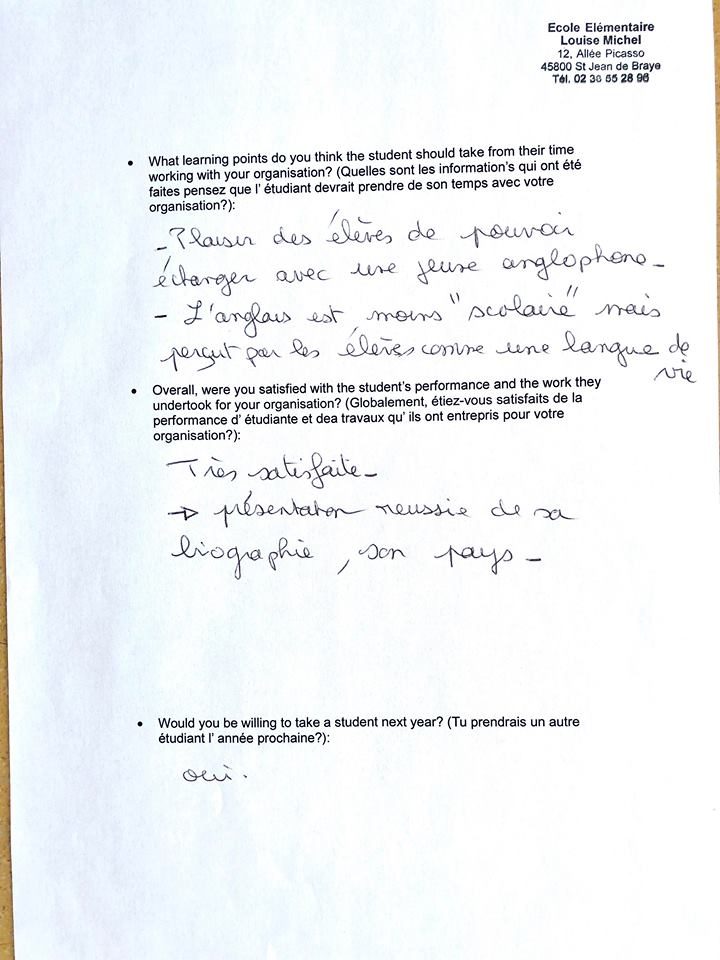 I feel that from this placement further learning can be developed. Since my placement was in France and it involved speaking French and English I feel that my French can be further developed. This will be useful for teaching my future pupils.

I aim to address this learning by regularly testing and practising my French by myself and with the other girls who came on this placement with me.

This placement has been a huge eye opener for me. I have learned and experienced so much while being here in France.

From a professional perspective I have learned about other cultures/backgrounds in terms of ethnicity and nationality. There are a lot more ethnicities in French schools than there are visible in Scottish schools. Along with this they have their laïque principle. This principle made me see they French’s views on religious beliefs in schools. I was able to compare this to Scotland quite a lot when observing the school days.

I observed how the French teach their school curriculum. They teach A LOT of French and Mathematics, because of this they don’t teach as much of other school subjects.

This placement made me appreciate the value of learning another language. As I came to France with limited French language knowledge I quickly learnt how important it is to have a good second language in your knowledge. I had to quickly pick up the basics of the language to help me communicate within the school and around the city of Orleans. Once I got the hang of some French it was very helpful and I enjoyed speaking in the language.

From my experience with learning French and teaching English to the children in France it made me feel really enthusiastic to teach a second language when I have my own class in Scotland. The reactions I got from teach English were very positive so this boosted this ambition even more. I also bought a few basic French books whilst I was here in Orleans, which I plan to use with my classes. I am really excited to share my knowledge of French with future pupils.

This placement made me think about how to teach a language right from the start where the child has no previous knowledge of this language. I took for granted learning a language and I came to realise how hard it really is to learn one. Through my teaching I discovered how to teach the basics of a language to the children. The French teach languages slightly different to how we teach in Scotland. They are focused on the listening and speaking aspect of learning a language, as they believe this is the best way to learn a language in the first instant. I came to learn that this technique is best way. Children learn through imitation so this technique is proven to work better than showing a child writing and text in the first instance. In Scotland I remember being taught a language with writing and reading as well as speaking and listening, which is too much for a child when first learning a language. One reason being is that the way to pronounce a word and be very different to how you spell it. This can be confusing for a child, therefore it is best to only get the children to speak and listen at first.

From a profession perspective I reflected on the behaviour management strategy similarities and differences between France and Scotland. I observed in France that they are a lot more hands on and in physical contact with the child when giving sanctions, which is a complete contrast to in Scotland. I was quite shocked by the hands on strategies they used, as this would not be allowed in Scotland. It made we reflect on how in Scotland we turn to other techniques from sanctions, for example the way we verbally sanction.

Personally, this placement made me become a more independent teacher, as it was sometimes hard to communicate with the teachers. I took charge of my own lessons and decided on my own what I would include in them, judging what I thought was appropriate and most beneficial for the pupils. I thought this put me in a good position and I enjoyed being responsible for my own teaching.