Today I was in Benjamine Duplouy’s class, CP/CE1. They started off the day by assigning the classroom helper roles. Benjamine went down the list of roles and asked who would like to do them for this week. The children put up their hands if they wanted to do the job and Benjamine picked a child to take on the role.

I think this is an important thing to do right at the start of the week so that all classroom jobs are covered before starting lessons and activities that involve using them. Assigning roles to children boosts their self-esteem, as they feel valued by the teacher as they have been picked and trusted to take on an important role for their classmates.

Since this is a composite class, whilst the CP got taught a lesson and CE1’s were given a word search to start off their day. Benjamine read out a passage to CP and then she got a few of the children to come up, one by one, and also read the passage she had just read. I thought this was a good way of testing the children reading and presentation skills. 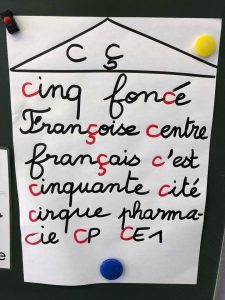 CP then had a French lesson whereby they were discussing the sound of ‘c’ and ‘ç’ . Benjamine didn’t tell the children what specific letter/sound they were learning about at first, the children had t figure it out. ‘c’ and ‘ç’ in French can sound like a ‘s’ at times so a lot of the children were shouting out words which had a ‘s’ rather than a ‘c’ and ‘ç’. It was only once a child said a word with a ‘c’ in it that Benjamine wrote it on the board and the other children caught on what the sound for today was. The other children then came up with words that have ‘c’ in them. For example, some included; cinq, François, c’est, police and garçon. Benjamine when got the children to get their mini whiteboards out and put a tick on one side and a cross on the other side, she then shouted out words and the children had to show a tick or a cross depending on if they thought the word had a ‘c’ or ‘ç’ in it.

I went around helping CE1 with their word searches and dictionary work. The children had a list of words and they had to find them in their dictionaries and then write down the page number they found them on. 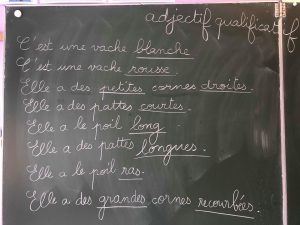 Once some of the CP children had finished their work a few of them want to try speak to me in English so wrote me messages in French and I translated them for them into English, I found this quite fun as I liked how interested they were in the language. 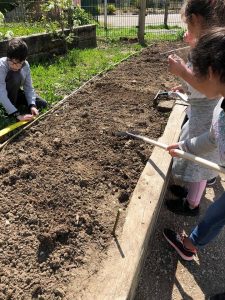 After lunch I went with Sylvie Lambert with Laura’s CE2s to help with her science lesson. We went out into the playground where they have a garden. In the CE2 lesson we were planting vegetables and flowers and learning how to use the garden tools and equipment correctly and safely. Before we went outside Sylvie explained on the blackboard with diagrams what we were going to do outside. I followed along so that I knew what they were doing too so that I could help and demonstrate instructions outside. The children helped Sylvie and I take all the garden equipment outside and then we both helped demonstrate how to use the tools. To start we raked the soil to turn it up and flatten it out. We then used bamboo sticks to indicate where we were going to plant each vegetable/flower. The children used metre sticks to space out the bamboo sticks along the garden. Once all the bamboo sticks were positioned in the ground we got rope that had a metal rod at ether end and placed each rod in the ground, right where each bamboo stick was, and ran the cord perpendicular, right across the garden to meet the bamboo stick at the other side. This created a grid to work with. We then started to mark out where we would plant the vegetables/flowers. We used a tool to create an indented line in the soil parallel with the robe and then deepened it with a sharper tool. I particularly helped the children with this bit, as it was trickier as the tool was big and heavy. Once we had created these valleys in the soil we took out the guide ropes and started to plant the seeds.

Firstly we planted the potatoes that they had, had in the classroom for 6 weeks now, to allow them to sprout. We used a tool that created a circular hole in the ground when you pushed it into the ground and pulled soil back up with it. The sprouted potatoes were then placed in the holes that were evenly spaced out along the line and covered over with soil. Next we planted peas. The peas were scattered across the next valley and then covered over with soil. Then we planted beans, which were planted the same as the peas. 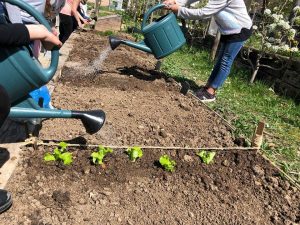 Next along we planted lettuce, we used the same tool that was used for the potatoes for this vegetable and it was covered over in soil so that the existing leaves were seen coming out the top of the soil. Beside the lettuce we planted carrots, the seeds were scattered in the valley and then covered over in soil. In the final two valleys we plated two different flower seeds, these were scattered in the valleys and then covered over with soil also. Once all the seeds were planted we got watering cans to water all the seeds. It was a very sunny day so perfect for the seeds to start growing. The children then got lollipop sticks and labelled each one with each of the vegetables/flowers. These were then stuck into the ground at the start of each planted line.