Today I was with Axelle Holef in CE1. Axelle started the day by asking the children the day of the week and what day comes before and after today’s day. She then spoke about the weather and asked the children to describe it to her.

She then started a mathematics lesson linked to a money goal of the classes. The class has a change piggy bank and each morning the children put any loose change into it and today they had reached 131€. They wrote on the blackboard as many ways as they could make the number 131 by adding and then how many ways of making 131€ using notes and coins. Axelle used hundreds, tens and unit squares to also give a visual representation of 131. 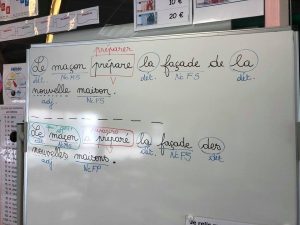 She then moved onto dictation. She wrote the sentence on the board and then discussed with the children what words in the sentence were the; preposition, adjective, noun, verb, feminine, masculine, singular or plural and the ‘determine’ word. She then read a passage and picked certain phrases out of it to analyse. The children analysed them and told Axelle whether they were feminine, masculine, singular or plural and what language rule makes them this way.

During break time a few of the pupils had to stay in for a few minutes since they had to correct their dictation. I think this is a good consequence as it teaches the children that if they do not correct themselves during class they then have to stay in during break. 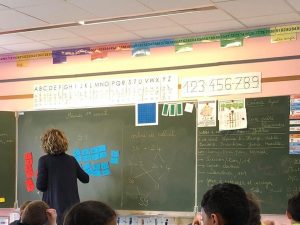 CE1 then had a mathematics lesson. They were again adding and taking away using different sized squares that represented hundreds, tens and units. These squares had magnets on the back of them so that they could be stuck to the blackboard and moved around depending on the equation. They also looked at partitioning tens into tens and units. She used a number line above the blackboard to help explain the jumping up in tens and then units. 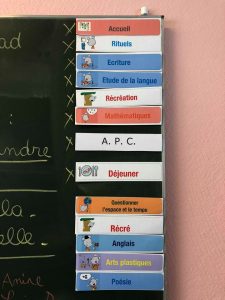 After lunch I taught my English lesson. This was my final class to teach my Scottish lesson to. I started of my lesson at the front of the class while Axelle set up the projector. I tested the children to see how many English phrases they already knew. I asked; how they were feeling today, how old they were, what their name was, what the full date was, what the season was and what the weather was like today. They all managed to respond to most of the questions I asked in English well.

I then started my lesson on Scotland. I did this lesson the same as all the others I had taught, getting the children to repeat each word a couple of times before moving on. When I got to the slide on tartan a few of the children told me that they owned items of clothing with the tartan pattern on them. One child even asked me where they could by tartan!

I felt this lesson went very well for my last teaching of my Scottish lesson. They were very engaged and interested about Scotland and they asked lots of questions at the end.