In Richard’s lecture today we looked at the fundamental mathematics within sport. Before the lecture I knew there was a lot of maths within sports but I had never looked deeply into each part of a sport and how it’s applied to mathematics. 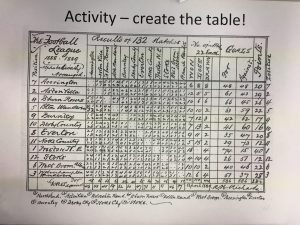 Firstly in the lecture, Richard had us look at an old football score table for 1888-1889 and compare it to the ones we see today. We looked at the rankings, the wins, loses and draws and how many the won for and lost against. To try and make sense of the old table we redesigned it by firstly putting the football team names in order from rank 1-12 and followed that with their point beside them. By ordering the team we used the fundamental mathematics category, from Liping Ma, of basic mathematical principles (Ma, 2010). We used counting to help us order and matching to match up the points form the old table to then new order of teams.

Once we had created the new table and a few minutes of problem solving time we came to understand by using algebra we could figure out the total number of point by multiplying the amount of games won by 2 and adding the number of games they drew. We wrote this out as Wx2 + D = P.

After speaking a bit about maths in sport, we worked in small groups to come up with ways in redeveloping an existing sport based on its fundamental mathematics. My group chose to redevelop the sport of netball. In the redevelopment of our version of netball we considered the length of the pitch, where the players pass to/move to during the game and the point systems, considering the goals/basket heights. 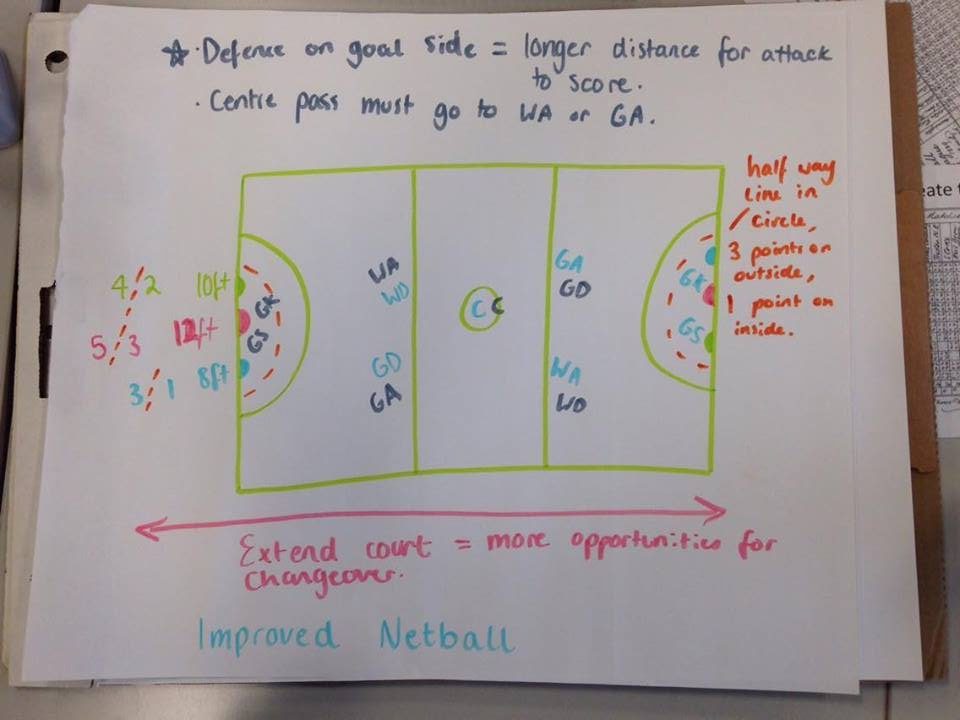 By extending the court length, this increases the chance for changeovers and more passes to up the chances of conflict with the other team. Thus makes the game more exciting and unpredictable.

In normal netball the ball is passed to attack, who are closest to the goal. But we decided to make it less simple and create a new rule stating that the defence player now stand on goal side and the centre pass has to pass to either WA or GA (who are now of the other teams goal side). This means there will be a longer distance to pass the ball to get a goal.

Instead of having just 1 hoop to score, we added 2 more hoops creating 3 hoops for possible scoring (a little like the Harry Potter sport of quidditch) which all symbolise different scores. Highest hoop equals a higher score, the lowest hoop equaling a lower score. We also considered from where the player throws the ball to score. We thought by splitting the key in two would make a more fair goal as it is easier to score when you are closer to the hoop. Therefore the closer half on the key gives you a lower score than the further away half of the key.

In our new version of netball there are a lot more fundamental mathematics taking place that the player needs to be aware of. The player will have to use basic mathematical principles (Ma, 2010) when deciding what hoop to try to score in. The use of addition and subtraction would be used to put the hoop score along with the place they have shot from together. They would have to think about what angles would give them the best chance of scoring a goal. They would have to consider the distance they would have to throw the ball as the pitch is a longer length now, perhaps the consideration of an extra pass in place in the midfield?

In my own time I wanted to research about mathematics used in lacrosse as i play it at university. There are many basic mathematical principles relating to lacrosse: 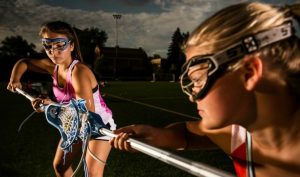 In the future, during P.E lesson at school I would like to link the curricular areas and demonstrate to pupils how basic mathematical principles can be seen in the different types of sports they will be playing. I would encourage pupils to do sports outside of school as well and bring in their discoveries of maths within it. I remember in school we did a topic of DST (distance, speed and time). I could look at this with the pupils and apply sports to it. This would make maths a bit more enjoyable if they are passionate about a certain sport.

Overall, while playing a sport if you think about it mathematical and apply this is strategy it could improve your chances of winning for your team! The fundamental basic concepts that I spoke about (weight, motion, symmetry, angles, position, counting, adding, subtraction, multiplication, simple algebra, force, distance, speed and time (Ma, 2010, p.104). This therefore proves mathematics can be applied everywhere including playing a sport.