Today is Mercredi (Wednesday) and in France this means it’s a half-day at school. The French have had a midweek break/half-day in primary schools on Wednesdays dating back to the 19th century. It is a government concession to the Roman Catholic Church, which wanted children to study the catechism (Catholic book) on their Wednesday afternoons off. In today’s secular (schools not connected with religion) France, Wednesdays afternoons are used for a mixture of sports, music, tutoring for families of means, or a scramble for working parents struggling to get by, who must either find a sitter or send their kids to a full day at a state-run leisure centre.

Despite long summer breaks and the four-day school week, French elementary school students actually spend more hours per year in school than average — 847, compared with 774 among countries in OECD. But the time is compressed into fewer days each year. They get about 2 hours a day for lunch and the French school day begins around 8:30 and ends at 4:30 p.m., even for the youngest, despite studies showing the ability of young children to learn deteriorates as the day goes on.

But many parents are afraid that the changes will force them to figure out extra childcare five days a week, especially at schools where the after-school program amounts to sitting silently at a desk for two hours or near-chaos in the play areas. 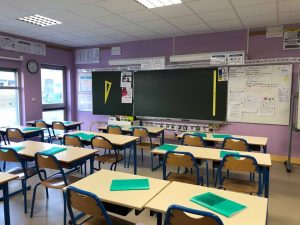 In the morning I arrived and was told I would be in the class CM1/CM2 with Agnés Courgeon. When the class came in I introduced myself and pointed to where I lived on a map. The children knew some English so during my introduction they asked me questions to help them find information out about me.

During one of their French lessons a boy came over to me, as he wanted to show me his English workbook. He showed it to me and I was amazed with how much English topics the class had covered. I compared it to my high school experience of languages in Scotland as they covered as much as I would have covered in 2nd/3rd year of high school. I was very impressed as I asked him questions about the different topics and he could respond correctly without looking at his book. The boy told me; he had two brothers, the colours and names of the clothing he was wearing and I pointed to different names of foods and he told me if he liked them or not in English, he loves sausages! 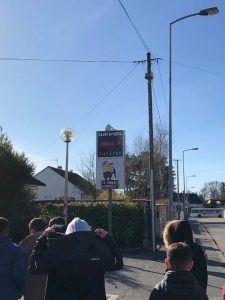 After the class wrote down their homework we went to their local theatre, which was in walking distance. The teacher told me that a few of their classes in the school as really in to theatre and acting. Whilst we were there I got the watch them practice and perform their plays. They were very good at using actions as the same time as saying their lines, which was helpful to me as I was able to work out and paint a picture in my head as to what the play was about since my French understanding wasn’t so great.

Once they finished at the theatre we wentback to the school and it was 11:30, home time! I met Beth, Briony and Lauren in the centre of Orléans after for lunch in central square as it was a nice sunny day. 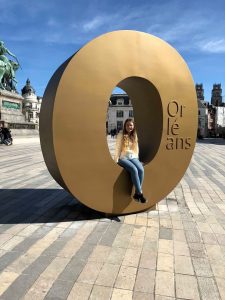