Today I was in the nursery for the morning. I stated in one classroom and I played with the puzzles with a group of children. One of the puzzles was a number puzzle. You had to fit 0-9 into their accompanying slot in the board. I played it with one of the boys and after he completed it I taught him the numbers in English. I repeated the number again and again with him until he was comfortable with them. I was proud with his progress and his pronunciation was really good. He then picked out numbers and put them in pairs and asked me what the resulting number was called. For example, the boy picked a 2 and a 9 and I told him that was ‘twenty-nine’. 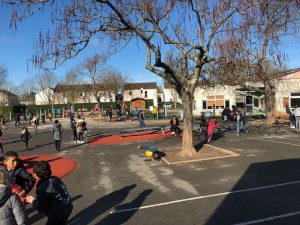 I then sang rhymes with all the children in the class. We did the rhymes we sang last week to see if they could remember them. They remembered ‘head, shoulder, knee and toes’ really well. I reminded them what each body part was in English and translated it into French for them. We also sang ‘1,2,3,4,5 once I caught a fish alive’, ‘if you’re happy and you know it’ and ‘insy winsy spider’.

I did these songs in all 4 classes in the nursery until 11:30am.

One of the teachers did ‘isny winsy spider’ with me. She did it in French and did it in English and the children joined in with both of us, including the actions.

During the morning I witnessed behaviour being dealt with. I was quite shocked with how rough the teacher can be and are allowed to be with the children. One boy was being badly behaved and one of the teachers grabbed him and made him sit in a spot with quite a force. You would not see this type on physical contact in Scotland.

My action plan for the next time I am in the nursery is to teach the children a song to do with the English colours.