Today I was with Benjamine Duplouy in a mixed class of CP and CE1, ages 6-8. I introduced myself and talked about the Loch Ness monster of which the children knew of. 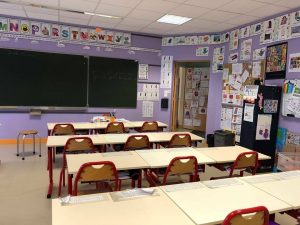 They read a passage from their comprehension books and a boy stood at the front of the class the read it to the whole class. At age 6 they are already pushed to be confident in speaking in front of their classmates.
They then moved onto sounds of letters/groups of letters, focusing on œu, eu and e in words. The children had to come up with words that contained these letters. 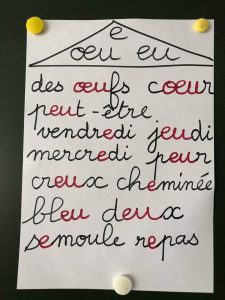 After break the class moved onto some maths. The CE1’s were studying right angles. They each got given two pieces of paper, secured with a paper clip, which created a right angle. With these tools they went around the classroom find right angles in a real life context. This was engaging for the children as it was hands on and got the children to experience their knowledge in a real life context. They then did a worksheet where the children had to identify the shapes that had right angles in them. The teacher then moved onto teaching the CP’s. They were doing counting to 20 and connecting this to money.
I helped the teacher cut out maths worksheets for later on.

In the mixed classes the teacher has try and spend an equal amount of time with each stage. This means a lot of differentiation is involved. The teacher needs to keep on stage busy whilst she works with the other stage. For example whilst she worked with the CP’s the CE1’s were given a worksheet to compete and the teacher briefly told them what to do with it at the start.

After lunch I was with the first class I’d been out with this week, which was the CP’s with Françoise Monclere. We were doing art on the topic of kitchen objects. I helped groups paint backgrounds for the kitchen.

Using the French vocabulary for the colours of paint we were using I was able to communicate to the children what they were painting with which colours. This was a good experience as I got to use some French vocabulary.

After their third break of the day I went with Mrs Lambert’s class, CE2, and we played maths games. I was given a group of children to myself to teach about time. We played bingo where they had to match the written time with a picture of a clock face on their card. After we played one round of this we then played it again but I would say the time in French and then tell them the time in English too and get them to listen and repeat what I was saying so they could practice saying the time in English. We then got out a big clock face that was interactive and I asked the children in English to show me a time on the clock, taking turns, and see with they understood what they were being asked.

This was a good experience as I got to work with a small group, which meant more one on one interaction. This helped the children to understand the English translation of the numbers and connecting words, e.g. part and to. I also gave me the opportunity to practice my French numbers.