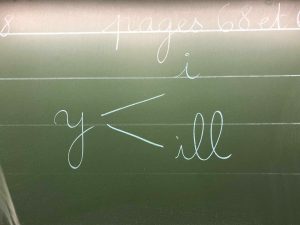 This morning I was observing in Françoise Monclere class, CP. They started their day with a French lesson on the sounds that ‘y’ makes. In French ‘y’ is pronounced as “eegreck’ and the sounds it makes in a word are ‘i’ and ‘ill’. The children put their hands up and came up with words that had ‘y’. Françoise put the words on the board under the correct column of sound – ‘i’ or ‘ill’. She used two colours of chalk to show the ‘y’ in each word. They then did an exercise on ‘y’ sound from a textbook.

CP then did a maths lesson. When they moved onto textbook work I got go round the class and help the children. I sat with one girl and helped her with the pages she was doing. The questions were about; partitioning, finding the numbers before and after, writing the words for specific numbers and what days of the week come before and after each other.

By helping the children I got to practise my French number vocabulary, which the children were able to understand correctly. I guided them with the use of finger counting.

After break CP, CP/CE1 and CE1 had singing practice. One song they did, I recognised as ‘We Will Rock You’. I joined in with the actions for this song. They also did the song they did last week, which I knew the actions to already.

After singing we went back to mathematics in the textbook. I again helped the children. I felt successful when I helped a girl fill in her number sheet with number words and symbols, as I did it all in French.

In the afternoon I went with Agnés Courgeon. She had a mixture of her CM1 and Laura Bellout’s CM1. A guest came into the class and started a lesson on the subject of theatre about a film. I gathered that he was speaking about a film called ’14/18′ and it was to do with the war. 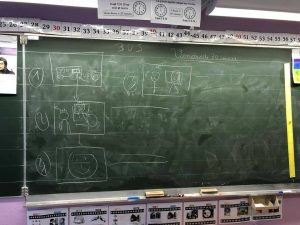 He spoke about costumes and storyboards and explained that storyboards are used to plan a film and describe camera angles. He spoke about wide angles being used so the spectators get a sense or the surrounding setting and then part of the wide angle are zoomed in on with close up shots to focus on a subject. I am interested to see a clip of the film now that I sat in on the lesson about it.