Today’s school day was slightly different, in that Lauren and I went to a secondary school to help an English class. The school was north of the city and called Collége Condorcet. We met Sophie, who was the English teacher, at the school and she explained to us we would help her in two English classes. The age of the children in the first class were 12-13 years old and the age of the children in the second class were 11-12 years old. 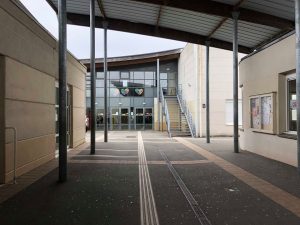 In the classes we introduced ourselves to the class and got the pupils to ask us questions in English so that they could find out more about Lauren and I. It was made clear to us before the classes started that in English class they are only allowed to speak in English when speaking to the class, speaking French is frowned upon. Also we were told to make sure we speak slowly to help the pupils understand what we were saying.

We then helped them with a Shakespeare worksheet. They had to create a dialogue between Shakespeare and an interviewer in English. I went round their tables helping them on how to form a question sentence in English. I told them you must start with a question word and that there are five main question words; what, where, why, when and how. This made sense to them and they were able to form the sentences.

After they had created a small dialogue, Lauren and I were the interviewers and the pupils were Shakespeare. We stood at the front of the class with one pupil and we asked the pupils questions in English and they had to respond in English as Shakespeare. I noticed that used the correct words when speaking in the past, present and future was something the pupils had to watch as a lot of them got confused with this rule.

I found this experience interesting to see how they teach an English lesson in France. Unlike in Scotland they teach and communicate within the lesson only in the language being taught. I think this is beneficial as the children are forced and will get more used to using the speaking the language, this means improvement is more likely.