Today I was with Sylvie Lambert and her class CE2. Today there would be no canteen food so the pupils were supposed to have taken a packed lunch but many of them forgot it. The teacher then had to phone certain pupils parents to ask if they would take a packed lunch in for their children. This reminded me of when I was in school and if you for got your lunch the same thing would have to happen. Sylvie started off the day with a dictation lesson. She spoke out the paragraph a couple of words at a time so that the children could write it down accurately. After she had finished the paragraph she picked a few children to repeat back what they had wrote down. 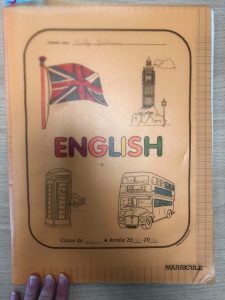 After break I taught an English lesson. Sylvie had a meeting at the start of class so I took the class by myself, without her there, for the first time. I enjoyed this more as I felt no pressure from her being there. I started by sitting the children down and then asking them to take out their English books. I then asked what the date was today in English and I got the children to tell me each part of the date as I wrote it on the blackboard.

The lesson was a carrying on lesson from the previous weeks one in this class. This time the biography I gave them didn’t have my personal parts in it but rather blank spaces for them to fill in with their own details. We practiced speaking all the sentences in the biography and went over them quite a few times so that they would memorise it better. Then I asked the children to fill in the blanks in English. Sentence by sentence I wrote them on the blackboard and showed them what they would put in the blank spaces. I gave multiple examples of what to put in each space. The children also put their hands up to ask me how to spell certain words in English, especially for the animal and sport sentences. I really enjoyed doing this on the board as I got to practice my French handwriting, as it is difficult for them to read my English style handwriting. Once they had filled in their biography sheets I asked a few children to read out their whole biography to me. I thought this pulled this part of the lesson together well as they could hear and see how the biography flowed, 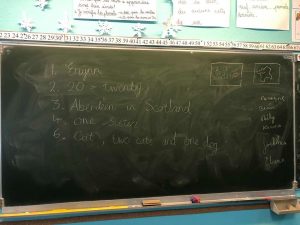 They then stuck a class picture underneath and circled their face and along side that they stuck a picture of the map of France and circled Orleans. This whole piece of work that they had then done of this page would be for me so that I would remember my time here with the children. I thought this was a very thoughtful gift. My lesson carried on until after lunch.

At lunchtime I went outside with the children. I played a card game with one of the girls, which involved me using my numbers and colours in French. This was fun as I got to interact with the pupils and using my French too. I also used my French during lunchtime to count down races and to count the numbers for hopscotch.

Once the children came back in from lunch we started the lesson again. On the page beside their personal biography page, I gave them the same handout as last week with my personal biography on it to stick onto this page. I then went over my biography on the blackboard, in French cursive writing, and told them to highlight each word that was personal to me. Underneath this they then each got a picture of me and stuck it along side a map of Scotland, which had a circle round Aberdeen. This would be for them to keep as a memory of me. 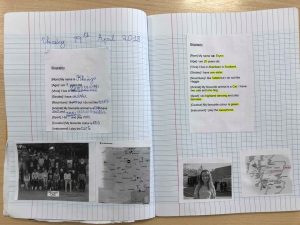 In the afternoon I went to Françoise Monclere’s class, CP, to help her with an art lesson. We went to the art room in the school and carried on the topic of kitchen utensils. All the children were given a sheet, which had a plate, fork, spoon, knife and chequered table mat drawn out on it. They used coloured pens and pencils to fill in and decorate their own one. While the children did this I pulled out a child at a time to help we with the hot glue gun. We were using the glue gun to stick down big polystyrene kitchen utensils onto an A2 chequered background. 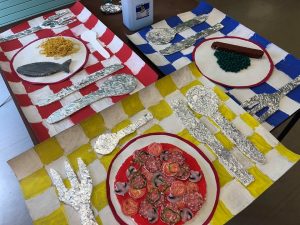 During this part of the lesson I had to explain and brief the children on the safety aspect of using the hot glue gun. I told them not to touch the nozzle of the gun as it is very hot an to keep their fingers away from the glue as its drizzled onto the polystyrene as it would burn their fingers. I felt this was an important direction to give children before doing any activity that has a risk of injury.

I demonstrated how to use the hot glue gun and then gave it to the child, they then traced the glue around the shape and then I placed the shape onto the background for them to press down into place.

After break I went back to Sylvie’s class to play maths games with them. I played the same maths game as last week but with different children. This time I knew how to play the dominos game better, therefore this time round the games went much smoother. Again every time a child had the answer domino and placed it down I asked them to show me that time on the interactive clock and then listen and repeat back to me what the time is in English as well as French. I enjoy playing the maths games with the children as I get the Practice by French at the same time as teaching the children English in maths and I get to work with a smaller group of children, which is easier for communication and checking for understanding.