Today I was in the nursery again and I brought a new song for the classes to learn today. I taught the classes a song to do with the days of the week so that they could learn the order of the days in English. 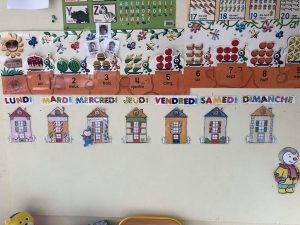 I then sang the children the song and they listened. I did the chorus part of the lyrics and then they copied and then we moved onto the different versus and they copied. They lyrics repeat themselves but each time you change the volume of your voice or add an action. This was good as the children were just repeating the same lyrics, which meant they would memorise it better. The first time round we sang it all normally, the second time was with a whisper, the third time was speaking loudly, the fourth was with a clap and the fifth was with a stomp.

They found this song quite difficult so the teachers told me that they will practice and when I come in next week again we will practice this song again until they are better at it.