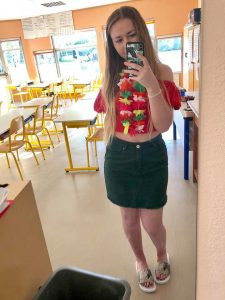 Today is my last day at École Louise Michel. I’m very sad to leave as I’ve had such an amazing experience and enjoyed every minute of it. Today was also special as they had a carnival dress up day for my last day. I dressed up at Lilo for Lilo and Stitch and all the teacher and children dressed up too. There were costumes such as scarecrows, Indians and princesses to jedis, clowns and dogs.

I was in Laura’s class today with CE2/CM1 and she Started the day by using a behaviour management technique, she sat at the front of the class, didn’t say anything and waited for silence. The children caught on and they quietened down. One of the children took the register, shouting out their names and asking if they were home or at school for lunch. I thought this was a good thing to do, to allow a child to take charge of the register. The child will feel trusted and respected by the Rachel for getting this role.

Laura then did a dictation lesson. She read out a passage a couple of words at a time and the children wrote them in their jotters. She every so often would go back to the start of the passage in case any child had missed a word. The class then went over the passage to make sure everyone had it correctly.

They then had a maths lesson. They got given a problem solving question which involved money. I helped one of the boys who was struggling with it and also asked a boy who was finished to help explain what he was supposed to do to him.

At break time I got to speak to all the children and see what they were dressed up as. I stood with some girls and I translated all the names of the costumes into English for them. 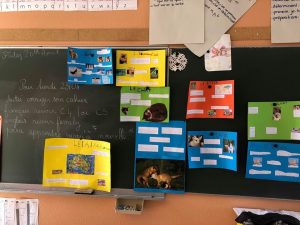 After break the class got out topic work. They each had a poster they were working on, each about a different animal. The poster contained information on the animals habitat, location, diet and life span. I helped the children cut out their information and then stick it down.

At lunch time I went outside to spend by last lunch time with the children. A few of the girls have a dance club at lunch times so they brought a speaker outside and showed me their choreography. I was very impressed with their dancing. It was a sunny 28 degrees today, which made the day even better. I also played hop scotch with two girls from CE2/CM1 and we counted the numbers in English and French. 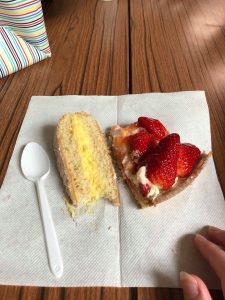 Once the bell rang for eating lunch i went inside to eat with the teachers. Near the end of lunch they brought out two cakes for me. I was so surprised! One was a late birthday cake so they sang happy birthday to me in English and i got to blow out the candles, unknown to me that these were tick candles and when you blew them out they relit themselves!! All the teachers and I laughed at that. One of the cakes was a traditional French cake, which is only made in France. I was excited that i got the chance to try it, it was very nice. They then brought me out some thank you/leaving gifts, which was all too nice. I got a few unicorn themed gifts as i had taught the school that the uniform is the Scottish national animal. I was glad that they had remembered this! I then got my thank you card for the teachers and pupils and let them read it out at the lunch table. I wrote half of it in French and half of it in English. I also added my contact details on the card so we could still keep in touch. I also have all the teachers some sweets that i had bought for the school. After lunch i went up to CE2 to receive some leaving cards and then I went back to Laura’s class.

After break time we had the carnival!! This was the most exciting part of the day. All the children lined up in their classes so that they could each me given a bag on confetti. Once everyone had a bag every body spread out across the playground and when one of the teachers rang the school bell everyone chucked a handful of confetti in the air. It was such a joyful moment. I had to help Sylvie throw her confetti as she was dressed as a scarecrow and she couldn’t throw it up with her straw hands. All the children were running round and past me, throwing confetti at me. It was such a laugh and all the children had such a fun time. We then spent the rest of the afternoon outside. I played basketball with a few of the CM2 boys and I scored a point that they were impressed with. I also got some photos with the teachers and a few children to remember my time at the school.

I have honestly had the bets time on the placement in France. I have learnt so much and enjoyed very minute of it. Missing the school, teachers and children already.