In school we have all been faced with multiple choice questions, and our teachers tells us always look over your answers when you are done. But when you go back do you ever look at a question and think it could be some thing else? But what should you do? Do you change it? Do you stick with your original answer? Do you logically guess on what lettered boxes you’ve already ticked and think there can’t be that many ‘c’ answers? This is what we explored in Richard’s lecture on counter intuitive maths.

Most people think they shouldn’t change their answer on a test once they have wrote it down. But when people and given time to think about an answer a lot of people change their minds. In actual fact if you change your answer from what it was to something different you are more likely to get it correct! Research suggests most people who change their answers, change them from incorrect to correct (Kruger, Wirtz & Miller, 2005). So when in doubt, change your mind! But if you then get it wrong, as this happens too, then it gives a negative effect of frustration knowing you had it correct the first time.

One of the reasons why people would choose to stick with with initial answer is due to memory bias. In times when a person has changed their answer and the results show its the wrong answer then this gives off a negative effect. This negative effect becomes more memorable because of the frustration you felt during it rather than a time you were successful in a choice/answer (Kruger, Wirtz & Miller, 2005). Kruger, Wirtz and Miller give an example of this in a real life daily decision making task. When food shopping you have to join a queue for a till at the end. You join a queue and then suddenly decide than a different queue would be better off and faster, but as soon as you switch queues your initial queue suddenly speeds up as there is one less person in it. This causes irritation and regret. It is down to these emotions that we remember an event more so than a positive one. Therefore, in future decisions, we decide to stick with our initial decisions as we know from previous experience, changing was a bad idea (2015). 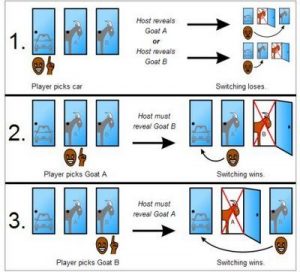 Richard decided to test the theory of always changing your mind from your initial instinct. A test called ‘The Monty Hall Problem’. This involved having 3 cups labeled ‘a’, ‘b’ and ‘c’. Under each cup was a car and 2 goats. In groups the 1st person would shuffle the objects under the cups and then the 2nd person had to try guess where the car was. The 2nd person would point to their initial guess and the 1st person would reveal one of the goats (one they know isn’t the car). Next the 2nd person would decide whether to stick with their initial answer or change their mind. Mathematically if you stick with your initial answer then you have a 1/3 chance but if you change your mind that changes to a 50% chance. This is because changing your answer resets your chances. So this proves the changing your mind theory!

What I learned from this lecture is that it is definitely better to change your mind! I also have the decision as a teacher whether or not to tell children the benefits of changing their answers, if in doubt.