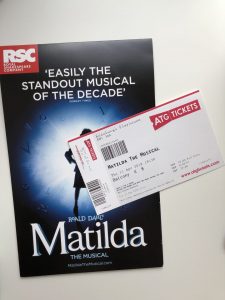 The strange tales of Roald Dahl have always captured my attention since I was a child. So when Matilda the musical was on in the theatre I couldn’t resist going.

The story of Matilda is about a young girl who has gifted and armed with a vivid imagination and telekinetic powers stands up to change her future. The message, that you can control your own story, and rebellion and protest can defeat the bullies, is deeply embedded.

She is neglected by her parents and is enrolled at a school with a rather masculine head teacher called Miss Trunchbull. In the musical Miss Trunchbull is played by a male to emphasis the masculinity. This may be a vilan in the story but every time she appeared back on stage she was greeted with a roar and laugh from the audience. This has a great contrast to Matilda’s teacher, Miss Honey, who has the sweetest heart and becomes one of Matilda’s few and only friends.

The setting of the musical is very eye catching and bright, which really brought scenes and songs to life. During the song ‘When I Grow Up’ bright, electric alphabet blocks are used as props lighting up the stage and the actors swing out to the audience on swings attached to the stage. This song introduces Act II in a really effective way.

The music in the play helps the audience feel the actors emotions and blend break up the acting scenes nicely.

I quite liked how the musical wasn’t a replica of the book or the movie as Matilda’s mum went to ballroom dancing classes instead of the bingo, which introduced new scenes. This made it a bit more exciting as you didn’t know what would happen during these.

This theatre production would be an excellent one to take second level children to as it was very enjoyable, cheery and relatable to a child of that age but also had a powerful but never too frightening vilan in it to add a more mature impression on it. I would either use the theatre trip as an introduction to a topic on Roald Dahl or use it to finish up a topic on Roald Dahl after they were familiar with the book and movie.