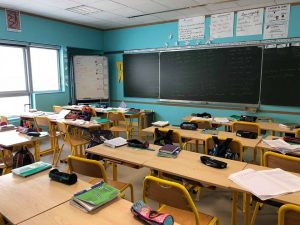 This morning I was with CE2 with Sylvie Lambert. I did a lesson on the topic of money. Mrs Lambert explained in French what we were doing and then we both collaborated to do a lesson in French and English. We did examples onthe blackboard to do with buying something from a shop and handing over a note (billet) and figuring out how much change you would get. I would pick the price of the item and write it on the board in Euros and cents, then Mrs Lambert would say the price of the item in French and I would translate in English. Next I would pick what note was used to pay for the item, this was translated in French and English and finally I would ask the class how much change they would get.

They did they working out on little whiteboards and I went around the class checking them all to assess if they were on the right track. I then asked one pupil to tell me what coins/notes they would get back in change, I placed magnetic coins/notes on the board at the same time as the pupil told me their answer. To complete the pupils understanding, Mrs Lambert and I, would then in French and English add up the initial item price with the change and show that this creates the note you handed over to pay. 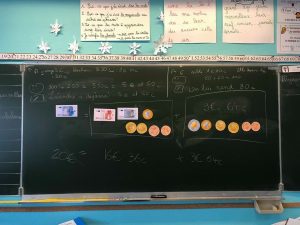 This was a good experience as got to use my French and English language knowledge to translate numbers to the children. I got to teach the English words for the number, the mathematical signs and teach them questions. For example, “how much is it?” or “how much change do I get?”.

I was able to analyse which English words they found easy and difficult to pronounce. They found pronouncing the ‘th’ in thirty difficult but other numbers, such as ‘6’ easy. 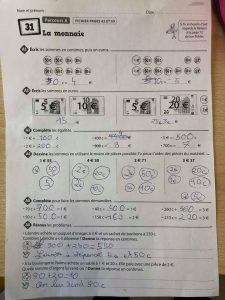 After the main lesson I took a small group of 5 to do a worksheet on what we had just taught and used fake money to help the children work out the calculations. This meant I got more one on one interaction with the children, which meant I could try be more understanding to them in terms of my English and French.

Next time I do a lesson like this I would suggest that instead of my placing the fake money on the board that the children come up to the board and do it themselves. This would boost a child’s self-esteem if they get it right as they physically did it themselves. 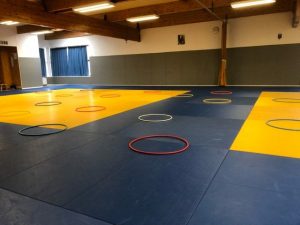 After lunch I went with Françoise Monclere’s class CP to the gym, which is connected to the local high school near the primary school. We walked to the gym and I was responsible for the back of the line, making sure all the children could be seen in front of me. Once we got to the gym the children took their shoes and socks off as we were going to do Judo. In France, Judo is an important sport to them. It builds up self-defence. I got to join in too so I took my shoes and socks off too. They had a proper judo room where the entire floor was made up of special mats. They had an instructor who did the lesson with them. I got to help the children making sure they were doing the moves safely and correctly after I’d seen the demonstrations. I really enjoyed myself, as this was a sport I hadn’t had to opportunity to teach in Scotland. I also had one on one time with a girl to help her do a forward roll. During the lesson the instructor let me shout out actions for the children to do in French, this made me feel involved with the children learning. I also got to shout out the colours and months in French and English to organise lines, etc. After this class I stayed and did the same lesson again but with Benjamine Duplouy and her CP/CE1 class.

The good thing about the experience is that it was different from sports I had taught in Scotland and also it got me physically involved with the children. I got to count down from three to initiate the start of a move, shout out actions and organise the children. It also gave me insight into what sports are important, to the French, to make sure children know.