Today the temperature in Orleans reached a high 22 degrees! A perfect day for a day of activities outside of school. The CM1’s from Laura’s class along with CM1/CM2 and CM2 classes all had a day of activities relating to health and well-being, which included nutrition, physical education and the body, CPR and how to react to accidents. The activities were scattered around the Saint-Jean-de-Braye area, around the school.

I started in the school with a group of children, learning about CPR and how to react to incidents. The children were put into 4 groups and each group was given a photo capturing an incident. The groups had to observe and write down what has happened and then write down what the next step to take would be, for example first aid. Then we spoke about phoning the emergency services and what to say in what order. The children were given a script jumbled up and they had to put it in an order that they thought sounded right to them. After we sorted them into a correct order. The teacher then used one of the children to demonstrate CPR and the recovery position. She showed the steps and then each child carried out the steps on one of the pupils she check for understanding. 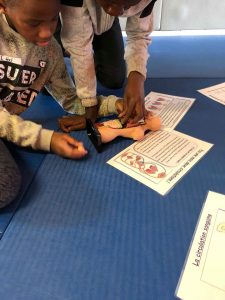 I then went to the sports hall at the local secondary school, with another group, for a session of physical education and learning about the body. We were in the judo hall and there was stations set up for the pupils to do. One involved learning about your pulse and how to record it. One was about the heart and the other was about the body organs and effects on them. I helped with the pulse station, the children had to run around a set up circuit three time and then record their pulse rate. I had a stop watch so once they had done the circuit I started the stop watch for 1 minute and the children counted their pulse. This was a fun activity to do with the children and I got to join in too.

We then went to the local old peoples home. There we played a game to do with nutrition and the food groups. It was a board game and you got asked question on card to do with the topic of nutrition, depending on your answer you got to advance on the board. There was a mini game on the side, where you could earn bonus points. A piece of equipment was used where by a dart was inserted and you blew into it and it shot out in the end. You had to aim it at a target that had answers on it. I learnt that in France they have another food group than we do in Scotland. This food group involves oils. We then ate lunch outside in the sun. 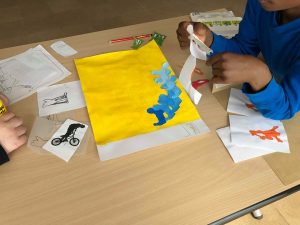 After lunch we went to a community centre where the children finished off their art pictures they were doing the previous day in school to do with nutrition and sport. I helped a group stick their pained sport silhouettes onto their background. One of the children asked me for a rubber in French and I was able to understand what he was saying which I was pleased about, so I went to find a rubber for him.

They then went back to the gym at the secondary school to do basketball. A lot of the boys in my class do basketball out with school in a club so are very good at it. I got to observe at the side and it was interesting to watch what tactics they have.

I enjoyed this day at school as I got to see how the French teach their pupils about health and well-being.