I’m going to be honest I think most of us came out of this particular lecture with a sore head. Today Richard taught us about place value and the binary system. This module is called Discovering Mathematics for a reason as every input I come out as if I’ve dug up gold. 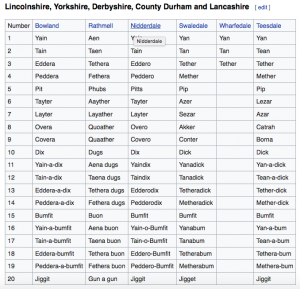 There are lots of number systems that exist in the world, I’m going to talk about the base 10, 12, 20 and 60 systems. Farmers from the North of England commonly use the base 20 system for counting sheep. Very time they count 20 sheep they pick up a stone and put it in his pocket which represents a set of 20, the start again (Bellos, 2010). The way the count isn’t by saying 1, 2, 3, etc. But rather

They use words instead of simple numbers. But not all shepherds use the exact same system, in Lincolnshire, Yorkshire, Derbyshire, County Durham and Lancashire they all differ slightly. You may notice for the value of 10 there is a combination of “Dix” and “Dick” which oddly is the same as the French for 10, “Dix”. So it’s not all a load of rubbish, some of the numbers have origins form other languages (Yan, Tan, Tethera, 2017).

Having a base number is essential for any number system to work smoothly with little confusion. If you had a ‘base one’ system, you would only have one number word. So for example, taking yan, tan, tethera, one would be yan, two would be yan yan and three would be yan yan yan. This base system would never work as for 100 you would have to say yan 100 times!! In addition imagine if every number had its own word that no other number had part of. You would have to have a very good memory! (Bellos, 2010).

Some communities that are more isolated haven’t evolved their base systems and still stick to tricky ones. The Arara’s in the Amazon still count using pairs of numbers. The numbers 1-10 as follows:

This again isn’t a practical number system to use as Bellos (2010) says it “make haggling at the market rather time-consuming”.

In the UK we use the base 10 system. This is a good system as the base is big enough that we are able to say numbers such as 100 without gasping for breath, but also base 10 isn’t too large that it over complicates our brains (Bellos, 2010). Richard asked us why did we pick this system for counting? We responded with because we have 10 fingers, almost as if both our hands represent the stone in the base 20 system. To say thats the reason, I wasn’t sure until I read chapter 1 in Bellos’s book. He explains that the obvious way to decide on a base number was to look at what markers we could use with our body parts. Looking at our hands we have 5 finger on each hand and again 5 sets of toes on each foot. The sets of 5 also give natural pauses and creates sets of 10; here was invented the base 10 system (Bellos, 2010).

The next base system we looked at was the base 12 system. The base 12 system has numbers 0-9, plus two more numbers that represent ‘ten’ and ‘eleven’. These extra two numbers are called “transdecimals” and represented as an x for ‘ten’ and a backwards, upside down ‘3’ for ‘eleven’. In this system 10 still exists but now represents ‘twelve’. The new digits are given names to avoid confusion with the base 10 system, these are dek for ‘ten’ and el for ‘eleven’, and furthermore ‘twelve’ is given a new name too, which is do, pronounced doh, which is shortened from dozen (Bellos, 2010). Here is a video showing the benefits of the base 12 system by Numberphile:

A very common base system used all around us everyday is the base 60 system. It is the most ancient base system know to man (Bellos, 2010). What could this be used for? It is used in time, angles and geographic coordinates and bearings. Originally back in 1794 watches were produced with numbers only going up to 10. This was quickly changed as an hours with 100 minutes in it was not as fitting as an hour with 60 minutes in it, they figured out that 60 had more divisors than 100 had. It was a little triumph in “dozenal thinking” as 60 divides into 12 and 24, both of which are used to make up a full day of hours (Bellos, 2010).

Binary is another number system I found much more confusing than the rest as it only has place values of 0 and 1… that’s it. It uses 0 and 1 to represent every quantity of numbers. Richard showed us its pattern and I just thought whatttttt???? I eventually became to understand it, my conclusion was that when column 1 was full you move it to the left and set column 1 back to 0. It goes like this…

Still confused here is another video explaining the binary system:

At the end of the lecture we were asked to now make up our own number systems. Me and Beth Arbuckle made up our own and it went a little something like this… 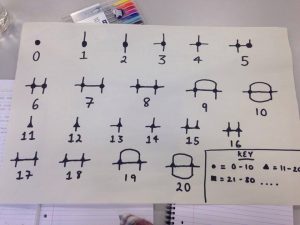 We used shapes and based lines reflecting the numbers around them. a circle was 0-10, a triangle was 11-20, a square was 21-30, etc. This system worked well as by counting the individual lines it made up the exact number it represented. It also work with math equations like addition, subtraction, multiplication and division!

In conclusion, by making up our own number system we were making to check they worked by using Ma’s characteristic of ‘basic ideas’. All base systems connect to basic ideas as numbers are what makes maths, maths in the end. By having a better understanding of base systems I can explore with with my future students and even connect it with foreign languages and their number systems.