Today I was assisting in the nursery. There are four classrooms in the nursery and contains children from age 3 to 5. In France their nursery is called the “maternelle”. I the nursery I was asked to teach Scottish/English nursery rhymes and songs. In each classroom I taught the children four nursery rhymes use all the actions to involve the children even if they could grasp the English vocabulary. The first song I did was “If you’re happy and you know it”. This song is repetitive, which would help the children learn it and it also involves actions to encourage the children to sing along. The next song was “12345 once I caught a fish alive”. I thought this was a good song as it got the children to practice their English numbers. The next was “head, shoulder, knees and toes”. This song was physically active and it taught the children body parts in English. The last song was “incy wincy spider”. I did this song with one class in particular as they sang the song first in French so I knew they knew it in French so I thought it would be easier for them to understand when doing it in English.

If You’re Happy And You Know It:

This was a good experience as I could see the children trying hard to pronounce the words and join in with the actions. It also made me realise that we speak too fast for someone who is French to learn what we are saying so therefore I sad to speak a lot slower. 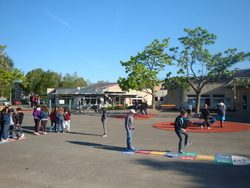 At break time I taught the children a few English vocabulary to do with movements. I held hands with a few children in a circle and we did actions to correspond to “up, down, in, out”. They caught on pretty quickly and were saying the words with me while doing the actions.

At the end of the day (11:30am) on of the children who was age 4 asked me questions to do with animals in English. At one point I translated butterfly for her and then she showed me that the class look after and observe stick insects, which were in the box in the classroom.