Today I went between Agnés Courgeon and Christine Aué’s classes (CM1/CM2 and CM2). In the morning I helped CM1/CM2 in an ICT lesson. They were trying up biographies of heros/important people from history. I helped the children set up their computers and format their word document. I also helped the children put the French accents on letter from their keyboards. Some of the people they wrote the biographies on were Anne Frank, Nelson Mandela, etc.

I enjoyed helping the children in this lesson as I had not helped in an ICT lesson before. One of the girls explained to me what happened to their hero. This man was injured in the eye when he was young and he was blinded in one eye. I was impressed with myself that I understood what she was saying. 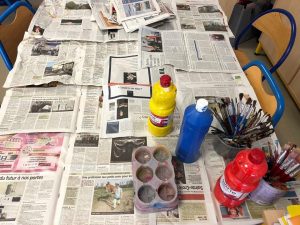 In the afternoon I was with CM1/CM2 and CM2 again but this time for an art lesson. The two classes are studying health and well-being at the moment, which involves learning about nutrition, physical education and the body, CPR and how to react to accidents. In this lesson they were creating collages out of pictures of fruits and vegetables, cut out form magazines. Each group had a template of their school building as their background and they spent the afternoon cutting out magazines and sticking to create a collage of healthy foods. Some groups categorised the fruit and vegetables into colour and stick them on in groups of colours. For examples one group used all the green fruit and vegetables to collage a tree in the background.

I was in the classroom belonging to Christine and I was in charge of the behaviour and management of this room. I enjoyed this lesson, as I am an artistic person, which meant I was able to help the children.

In Agnés’s room they were painting and drawing on the topic of physical education. I observed one group and they were painting silhouettes of different sporting activities, for example, skateboarding and cycling. They allocated a colour to each sport and then mixed white paint in gradually so that each silhouette got lighter and lighter in that colour. 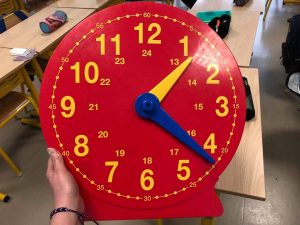 After break I went with Sylvie Lambert in CE2 to play maths games. I did a game of time bingo with a group of 5 children. 4 of the 5 children had a bingo card and the other child was given an interactive clock face. I read out each time card in French and then in English and got them to repeat the English twice through. The child with the clock would then show the time on the clock and show the rest of the group. If they had the matching clock face on their card then I gave them the time card. We did the game a few times and the children were getting better at pronouncing English numbers. This was a successful game and they all engaged with the English.