On the 26th of September we had a lecture with Derek. No one knew this lecture would lead to us being Derek’s most successful ‘Makey Makey’ class throughout his time teaching this module.

Derek firstly spoke to us about using technology in the classroom, its benefits and purposes for real learning. He then introduced the material called ‘Makey Makey’. This is an invention kit which turns everyday objects into touch pads and combines them with the internet. It is a lot where creativity and invention combines and a person of any ability can use it.

Derek got our class to gather around a set up example he had prepared. His example was called ‘I don’t think you’re ready for this jelly’. He used the science of water and conductivity to create a sound game where by when you touched jelly in a pot it would create a sound/lyric. He had several jelly pots hooked up to the ‘Makey Makey’ and each one played a different part of Destiny’s Child’s song “Bootylicious”. The lyric sounds were coming from a programme called ‘Scratch’ on his laptop. He had imported the sounds into ‘Scratch’ and then his laptop was connected to the ‘Makey Makey’ where by the sound clips were synced with individual cables which went into the jelly pots. It was really quite entertaining but I could appreciate at the same time all the learning a student could take form this example. Derek also showed us various examples off the ‘Makey Makey’ website to get us inspired.

He then set us a task which was to be completed in the forthcoming week. We had to create our own ‘Makey Makey’ activity for a classroom. The activity’s purpose would be to aid a child’s learning and link to another curricular area of learning. We got into groups and started to brainstorm ideas. My group consisted of myself, Jen, Beth, Anna and Aine. We thought of a number of ideas before reaching our final one, one idea we came up with involved using conductivity in fruit to create music. But our final idea was to create a life size game of ‘Operation’.

It took us 3 sessions to collaboratively create our invention as a group. Firstly we drew around Jen to get an outline of a body onto cardboard. We then decided which body part (muscles and bones) we would use for the operation. Once we had decided we marked out rectangular shapes on the cardboard where we would later cut out to create the resting place for the body parts. We chose to operate with a brain, heart, humerus, small intestines and tibia. We cut out the rectangles and stuck recycled plastic boxes underneath to hold to body parts. 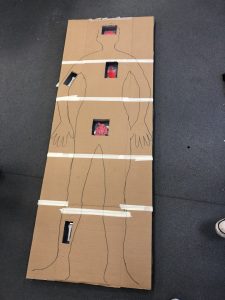 We now had out base done and we could now start to neaten it up and make it look more like the real operation game. We drew a new body outline on white paper and made the background purple and re-cut out the rectangles. The holes for the body parts were then lined with tin foil, this was so that when the outsides of the holes were touched when playing the game it would react and conduct electricity through the wires with the ‘Makey Makey’ and could create the buzzing noise. We wrote the title of the game on the side and poped all the handmade body parts in their correct holes. 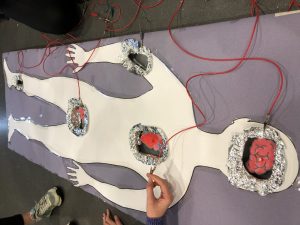 It was very rewarding testing it out for the first time and hearing the buzzing sound when we touched the sides.

Our invention could link to a few different curricular areas. The main curricular area was technology and this linked to health and well-being, expressive arts, science and mathematics. 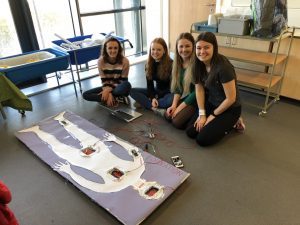 We then got to present our invention to Derek and the class and test out everyone else’s inventions.

This project has inspired me to use this kit in the classroom and get children to use their imagination through invention and creativity.

Today we had a music workshop with Sharon. The workshop started with Sharon showing us how to introduce music to children through using your body and vocals for making sound. The advantage of this is that there is less mess and disruption than if you were to get musical instruments out in the classroom. This way every child is equal with their resources and are more engaged with the teacher than their ‘instrument’.

We sat in a circle, cross legged, and Sharon got one person to keep a 4 beat rhythm. Everyone else copied. Sharon then pointed at people individually and ask them to create a new rhythm to follow. We carried this on for a few different people to take charge in.

Sharon then added cups to our lesson. This was a step up from just using our bodies and would be a bit more exciting for children – keeping them engaged. We then did the same activity but using cups as part of our rhythms this time. 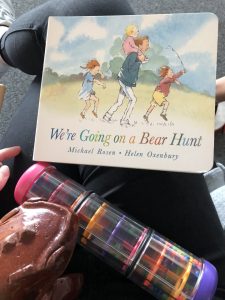 Sharon then discussed with us the use of story books in music. By adding sound effects to a story it enhances the words and how the children imagine the story in their head. She gave examples of movements described in books such as tip toeing and how that would be represented on a piano – the higher pitched end, compared to a stomping movement which would be on the lower pitch of the piano.

We then split into groups and were given a task. Aine, Taylor and I’s task was to create our own recording of a narrated story paired with sound effects. Sharon gave my group the story ‘We’re going on a bear hunt’ which I thought was a great book for the task as in the book where are a lot of sound effects described. We scanned through the book and then picked instruments we thought would suit the different movements and words in the book. We then practiced narrating the book and adding the sounds to the correct parts and then recorded the whole thing. Here is the results:

I really enjoyed this workshop and it really made me think how language can be linked to music. It had inspired me to try this in my class in the future.

When doing this lesson with a class it is best to pick story’s that the children already know so it is more motivating and meaningful for the children. Also try and pick a story that something exciting happens in it.