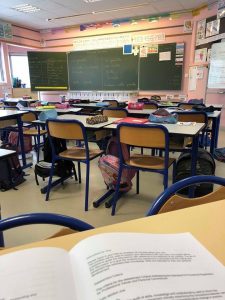 Today I was with Axelle Holef with CE1, ages 7-8. The teacher started the day with French. She did a dictation lesson, which I thought was very advanced of them since they were only age 7/8. This lead onto a lesson based on the sound “ouill”. The class had to come up with words that had “ouill” in them. Forexample, the word “ratatouille”. 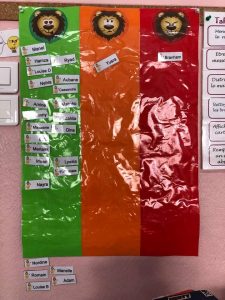 During the lesson I noticed a traffic light behaviour chart being used. This is similar to the ones they use in schools in Scotland. A boy moved his name from green to amber as a warning for inappropriate behaviour.

After break they had singing practice with CP and the other CE1’s. The practice was structured as the teacher would sing and the children would listen and then repeat. They use actions to help tell the story of the song too. In Scotland when we have assemblies they children are normally put in rows in order of their class. But in my French school they did it in a way so that everyone could be seen when standing. The tallest went at the back and smallest were at the front. They had been given a number at the start of the years according to their height and this was the row they would be in. I thought this was a great way of organising assembly rows as each child can be seen for behaviour situations. During the practice there were a few behaviour disruptions which otherwise would not have been seen if they were not organised in height order.

They then had physical education where they ran circuits of their playground. Right now the school are practicing for a big race, which is taking part in the area. I was explained by one of the teachers that the CP’s have to run 1000m and the CE1 have to run 1250m, and the upper years would run longer distances than them.

During lunch we organised my schedule for teaching next week and what I would be doing. We discussed speaking in English to the classes about Scotland. This would involve all traditional practices, food, sports etc. Also ideas of a topic of sport and a topic on a day at the beach were considered. They explained I would speak the whole lesson in English and they would be there if translation was needed or if there was some confusion.

After lunch they did work on a film project. The ways they watch films are very different to how we would in Scotland. In Scotland we would put a video on our interactive boards, but in my French school they only have black boards. So a big white piece of card was placed over the blackboard and a projector was used to project the film. The film was about a crocodile called “Katia et le Crocodile”. The film was in black and white and the children had to describe to me the colours in French and English. This was a good opportunity for the English to be part of the film lesson.