This morning I was with Laura Bellout in CE2/CM1 and she started with a dictation lesson. The lesson was about new years resolutions. I was able to follow the dictation and translate it.

It translated as “On the first of January, we organise an outlook for celebrating the start of the New Year”. 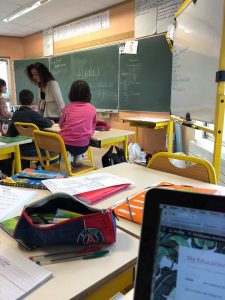 They then had a lesson on numbers and fractions in Mathematics. They were doing number from 0 – 9,999. The exercises in their textbooks told the written word form of the numbers and asked them to write out the numbers in digit form and visa versa. In French they put a dash between each number word, for example neuf-mille-huit-cento. In English that would be nine thousand and eighty five. They also looked at thousands, hundreds, tens and units and identified how many were in each number.

They then moved onto doing fractions. The fractions lesson was to do with fractions in time. The teacher created a time line on the board and marked the 10-minute intervals. She then explained how time could be fractioned and added fractions to the time line.

Whilst Laura taught a lesson in French I used the time to practice the French cursive writing. I enjoyed doing this at it was relaxing and was good practice for writing on the blackboard for future lessons. 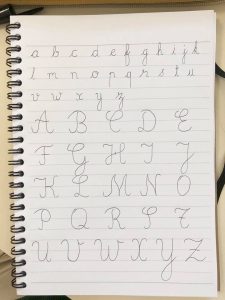 After lunch I taught an English lesson to do with family. I had a work sheet for all the children with the Simpsons family tree on it. I got the children to look at the tree and then I discussed with them the English all the labels for the family members are. I wrote the English on the board and then the French translation beside them. I taught them mother, father, sister, brother, son, daughter, grand-father, grand-mother, cousin, aunt and uncle. I then asked the children questions in English about the Simpson’s family tree. For example, “who is Marge’s son?” and “who is Bart’s uncle?”. The children answered in full sentences, for example “it is…” and “they are…” and I wrote their answers on the blackboard. I was impressed with how they picked up the English and I think the characters of the Simpsons helped as they engaged the children, as the Simpsons are familiar to them.

My action plan is to play a matching card game with the children later on in the week to test their knowledge on the English family. 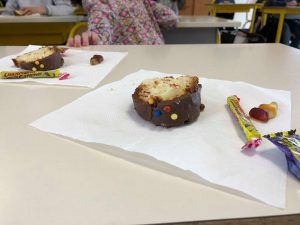 It was Leo’s birthday today as well so we sang happy birthday to him in English and then Spanish and French too! His mum made a cake so Laura cut it up and we all got a piece to finish off the day.