Today I did a couple of lessons, in the morning, on the topic of Scotland. I first taught in CP with Françoise Monclere, and then with Benjamine Duplouy and her CP/CE1 class. 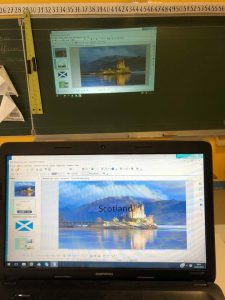 My presentation included; where I live in Scotland, our flag, the Loch Ness monster, castles, traditional food, animals, tartan, traditional sports and Scottish rhymes/poems. I started by introducing how to say “Scotland” and its translation in French. I then showed them our flag and explained that we also have a flag for the whole of the United Kingdom. I spoke about the Loch Ness monster and explained that its existence is a matter of own opinion. Nobody knows if it really exists or not. This got the children thinking what their opinion was on the mystery. I told them that castles are found all over the country and that I even live right beside one. This amazed them. I moved on to speak about the traditional food in Scotland. I taught the children how to say, “I like”, “I do not like” and “I love” in English. After this I had traditional pictures of foods on the board and I got the children to listen and repeat the food names. In particular, Haggis was an interest. They asked what it was so I had to explain that it was sheep stomach. Their reactions to this weren’t appetising. But the teachers explained to the children that this was similar to the fact that they eat snails and frogs. If you were not French you probably would turn your nose up at them. We put together sentences about which foods we do and don’t like. We then moved onto animals and I did the same, asked the children to listen and repeat the names of the animals. Unicorn was one of the animals I had on the board and I explained that this was our national animal. From this discussion I found out that their national animal is a roaster. I next showed them tartan. I explained that tartan is a pattern that can be used in anything, from all types of clothing to decorating furniture/interiors of houses. I then spoke about traditional Scottish sports, these included; highland dancing and the sports involved in the highland games. I got the classes physically involved and demonstrated, and got them to copy, highland dancing moves. They enjoyed being up out their seats and physically active for a couple of minutes. I finally read the classes a Scottish rhyme and poem. I tried to get the classes to say the rhyme with me but they found this quite advanced.

The children were fascinated and asked loads of questions at the end, as they wanted to find out more. I got asked questions to do with; school uniform, if the Loch Ness monster is real, if our homes are the same, if I’ve seen the queen, if the castles are occupied, our traditional breakfasts, if I do any traditional Scottish sports and what the weather is like in Scotland all year round.

This was a great experience as I got to teach about my home country, which I am proud of. I learnt that I had to speak slowly so that I was understood and the children could accurately repeat back what was being said. It was good how interested and engaged the children were. I think having them physically involved helped keep them interested.

When I do this lesson to the other class I think I will consider the rhyme section at the end as the children today found that bit quite challenging.

During lunchtime Laura Bellout found four leaf clovers in the playground and she gave some of the other teachers and I one. I explained to them that they are lucky in Scotland and especially Ireland.

After lunch I was with Sylvie Lambert in CE2. I took a small group of four pupils to do time in mathematics. We played a game of bingo, in which they had a card containing six clock faces. I had a deck of cards which said different times in 24 hour time. I said the times on my cards in French and they had to see if any of their clocks faces corresponded. After I said the time I went round in a circle asking a pupil to show to that time on a interactive clock face. Once they got that correct I told them that time in English and asked all four pupils to repeat it. After that then the pupils could check if they had the matching clock face on their cards.

This activity helped the children learn clock times in English whilst improving their French time knowledge.

After school I went to see the ‘My Fair Lady’ musical with Agnés Courgeon, Christine Aué and Laura Bellout, with their classes CE2/CM1, CM1/CM2 and CM2. We left the school at 5:15pm and got the tram to the theatre. The theatre was called ‘Zenith d’Orléans’ and was located across to water in the region called Olivet. The journey there was really enjoyable as I was with one particular girl from CE2 who is very good at speaking English. I was able to understand her French and English and have a conversation in both languages. She was willing and really wanted to help explain what she was saying when I didn’t understand what she was saying in French. I was impressed with how willing she was to communicate with me. 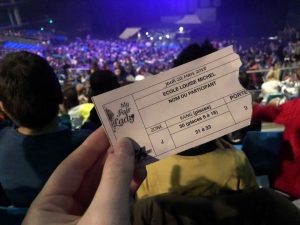 Once we got there we had a packet dinner and then took our seats for the show. The show was half in French and half in English. The song were in English as the play was originally English, so every time a song came on the girl, who had sat beside me, would look at me and ask if I understood, as she found it exciting that I understood what was being said.

The experience was good as I got to see how the teachers connected to the children learning to an experience. In Scotland we would call this ‘experiential learning’.