6:45am, I wake up and the day is here. The day I’ve been so nervous but excited for. So many things are going through my head; what if I get the wrong bus? What if my teacher doesn’t speak much English? What will a French school day be like?

After a quick breakfast with my placement accompaniments I head for the bus stop, everything went smoothly and I arrived at the school in plenty of time, 30 minutes before schools starts. 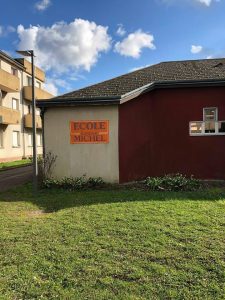 I met all the teachers in the staffroom when I arrived, including the teacher who had been emailing me, Sylvie Lambert. I was paired up with a teacher called Françoise Monclere, who taught CP (ages 6-7). I spent the whole morning there. My paired teacher said she wasn’t very good at English but she definitely could say for English than I could French and she was much better than she thought as well, she even knew the word for photocopy! After we took the class in from outside I was introduced to the class, I wrote a little intro French speech, which including things like my name, age, where I was form and studied and what I was interested in, the night prior which helped me but I know I need to improve it as I will be jumping from class to class each day and will continually have to introduce myself to new classes. I was quite nervous when introducing myself as this was my first day and I didn’t know if my pronunciation was correct.

I was very impressed with how much English the children aged 6 knew, in Scotland I didn’t start to learn an extra language until I was age 10. They were able to say hello, ask how someone was and ask how old someone is. 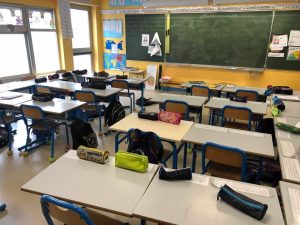 In the morning they had French lessons, mathematics and a break. What I noticed in the French classroom is that the French teach in small periods of time, approximately 30 minute per lesson. They start a topic and move on quicker than teachers would in Scotland.

They all use black boards still. There are no white boards or interactive boards in the school, which gave me a sense of the culture here.

Their lunch is 2 hours and they have another break after this between lunch and home time. This means they have 3 breaks a day. Between lunch and home time I was with 2 more classes, firstly CE2/CM1 and then CE2. These children were aged 8 – 10. Sylvie Lambert taught both these classes. There were 2 other students at the school with me but they were French students at the university. They worked with the older classes in the school.

Something I experienced that is different in Scotland is the way they give sanctions. They are more hands on wit their sanctions in France. In Scotland you wouldn’t be allowed to aggressively pull a child by the arm, of which I witnessed in the French classroom.

The first thing I noticed about the pupils in the French school is that there are a lot more different races percentages of pupils than in Scotland.

This also leads to the different religions and ethnic backgrounds that are in the area. As I have spoken about previously, the school I am in is a ‘Laïque’ school so there is no sign of any religion allowed. There is without a doubt loads of different religious beliefs in the school but I would not be able to tell which pupils believe in what as they show no sign through clothes, accessories, personal objects, etc.