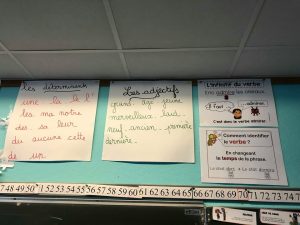 Sylvie then moved onto mathematics. The children went over some sums on the topic of money before they were given an evaluation test. I asked Sylvie about the test and she told me they are given a test when she thinks the class are good at the topic, then she judges from the results if the class is ready to move on and advance or not. She said sometimes the class is split as a result of the test and one half move on and the other half practice the specific topic at that level more.

After break I taught an English lesson. I wrote the date in English on the board and got the class to copy it into their jotters then we went over ‘Hey Diddle Diddle’ and I gave each child a hand out with the whole rhyme on it so that they could keep it and stick it in their jotters. The first few time we went over the rhyme I allowed them to look at their hand out and then I asked them to close their books and try to pronounce it from memory. Some children caught onto the English very well and were able to memorise it better than others. 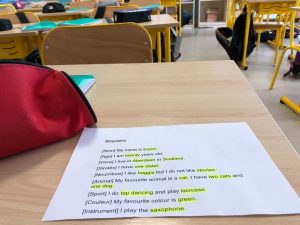 I then handed out one biography to each table group. The biography contained everything I had mentioned in my Scottish lesson. The biography was about me so I highlighted all the parts that were personal to show that’s what they would change to suit their personal life. I started with “my name is…”, I practiced the sentence with them a few times and then I asked them the question “what is your name?” and they responded to the question with the answer on the handout. I then randomly asked individual children the question to check that they were all understanding and to give the children a chance to practice it, only hearing themselves. Next I did “I am … years old” and asked the class as a whole and individuals “how old are you?”. Then I did “I live in … in …” and asked the question “where do you live?”. And again I did the same thing with “my favourite colour is …” and “my favourite animal is …”. To check for understanding even more at the end of my lesson I mixed up the questions and randomly picked questions that we had gone over to ask individual children. I was impressed as most of the children understood what I was asking and knew which sentence to use to respond.

I am super happy with how this lesson went as they all were engaged because of the nature of my lesson the children always had to be prepared as they could be asked a question by me. Sylvie gave me feedback and she said she was very happy with the lesson and liked how I asked the questions to the children.

My action plan for next week with CE2 is to use the same answer sheet but without my answers so that they can copy and write their own biography using the handout again but filling in the blanks this time.

After lunch I was in the CE2 classroom but Laura Bellout was teaching. She was teaching a history lesson. The lesson was on ‘the man of tagon’ – translated from ‘l’homme de tautavel’. Laura wrote a few facts about the topic on the blackboard and the children had to write them down. They then swapped their paper with a partner for peer marking.

After their afternoon break they had singing practice. CE2 went with Laura’s CE2/CM1 class. They sang a couple of songs in French with actions. I had to give a sanction to one of the boys who were misbehaving, I told him to move and sit at the side where we would not be distracted.