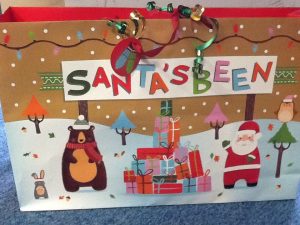 We had a surprise visit from Santa in P2/1 this morning !!

He was really, really funny and he had a rapping Dalmation puppy with him. His reindeer were happy to munch on their carrots while Santa gave us our class presents. It was great fun opening them up and everybody tore bits of the wrapping paper off.

We were so excited and he said we were all on the good list  this year – even the teachers! 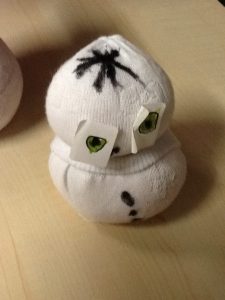 Primary 2/1 would like to wish everyone a Happy Christmas and best wishes for 2017 !

Primary 2 have been learning about night and day through their Art. Here are some of their stunning sunrises. They enjoyed turning them into 2017 calendars. 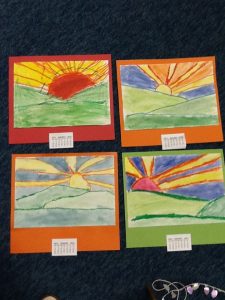 Primary One have learned that there are 4 seasons in a year by making their beautiful tree through the year calendars. 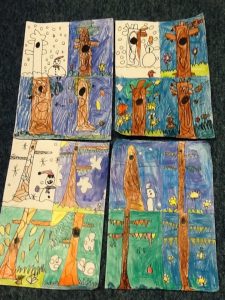 During a Science afternoon we were shown a picture of a cave and then asked whether or not we could see in the dark. This was P1’s introduction to,”Concept Cartoons.”

At first the answers we came up with were not related to the questions e.g. someone thought there was a bear in the cave and someone else thought that there were monsters living in the cave.

We were asked more questions and asked to look closely at the picture. Eventually we realised that the girl with the torch could shine it into the cave and we could see in the dark. Then someone said  if all of the children in the picture shone their torches up to the ceiling then it could light up the whole cave.

Very good answers but, we decided to test it out in our own classroom. We turned our flying saucer into a cave and four of us sat in the dark while we were asked questions. At first we shone the torches we were given then we realised that if we sat in the dark for long enough then our eyes could see shapes.

Our final conclusion was  that we could not see clearly in the dark but, we eventually saw shadows in the dark as our eyes became accustomed to the darkness.

We had to ask lots of questions, discuss what we thought would happen with others and then change our answers as we tested out our theories. We had to think hard to come to our conclusion but, it was fun.

Thank you to Mrs Thomson, Mr Brockie and Mrs Inglis for their hard work in putting together our,  “Born in a barn” Nativity ( and all the other behind the scenes helpers also).

Primary 3 pupils were the stars of the show and they sang like angels. Well done, P3 !

P2 and P1 we are very proud of you too. You sang your songs beautifully. 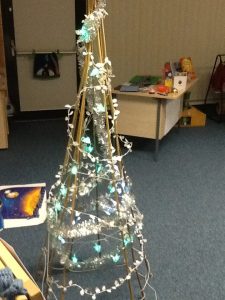 P2/1 have been very creative and made their own Christmas tree from garden canes and string. One problem we came up against was that two of the canes became twisted and we only noticed this when the tree was constructed. This made the Christmas tree less sturdy than it could have been. However, we talked about this problem when  we thought about where the design fault lay and then we discussed  possible solutions.