The Add users process has been enhanced. You can now find teaching sets and add groups of pupil at once.

In the original Glow (pre Oct 2014) blog the user roles were controlled by the Sharepoint group that the blog was created on. In the new blogs service users are added and their roles controlled on the own blogs dashboard.Users can have different roles on a blog, these will come with different permissions:

Administrator – somebody who has access to all the administration features within a single site.

Editor – somebody who can publish and manage posts including the posts of other users.

Author – somebody who can publish and manage their own posts.

Contributor (+ Upload)  – like Contributors (see below) but with the ability to upload files. (This is not a standard WordPress role but one developed for Glow. It allows pupils or staff who have the role to create posts with images and other media and save them as pending. Editors or Admins can them publish.

Contributor – somebody who can write and manage their own posts but cannot publish them.

Subscriber – somebody who can only manage their profile.

The Subscriber role can be used to allow Glow  users to see a private blog.

The roles of Administrator and Author are the most commonly used roles.

Note: in the ‘old Glow ‘ environment user roles were set in the Glow  group the blog belonged to. This mapped roles from Glow  to wordpress, the contributor role mapped to author. This can lead to confusion, if you make users contributors in WordPress they will not be able to publish the posts that they create.

As of January 2016 we have extended the Add users screen so that it can use information from SEEMIS that has been passed to RM Unify. In particular Teaching Groups. This allows the selection and bulk addition of users.

Here is a Screencast of the new functionality:

Teachers can select Local Authority and the Establishment, Pupils can only select groups from their own Establishment [3]. 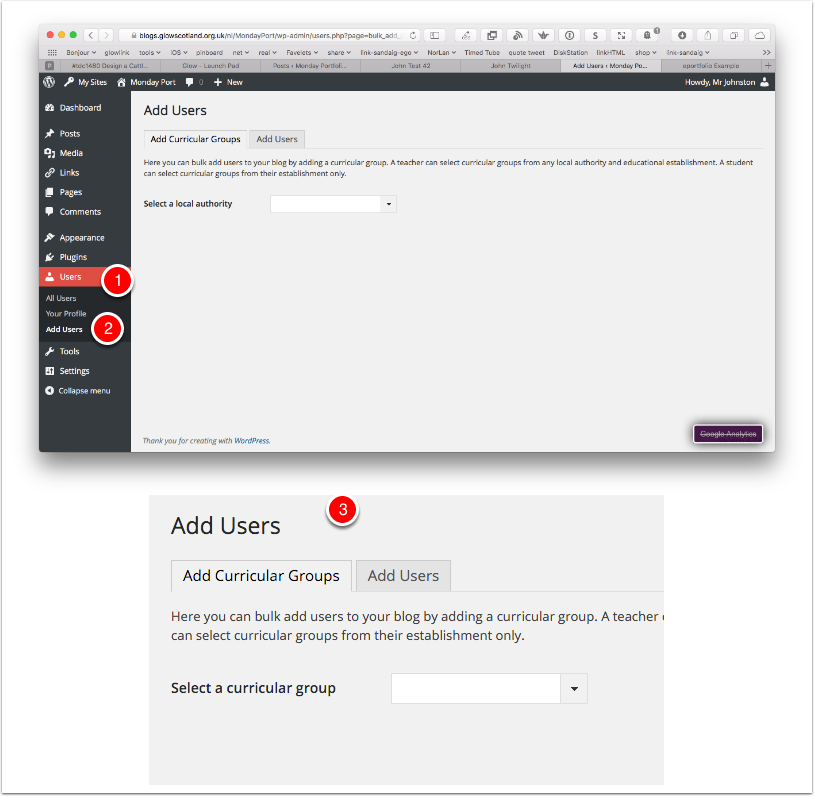 Teachers are Presented with a Popup list to select the Local Authority They want. They can either select from the list manually or filter it by typing [1].

Once they have selected a Local Authority the page will ‘pull in a list of establishments’[2]. 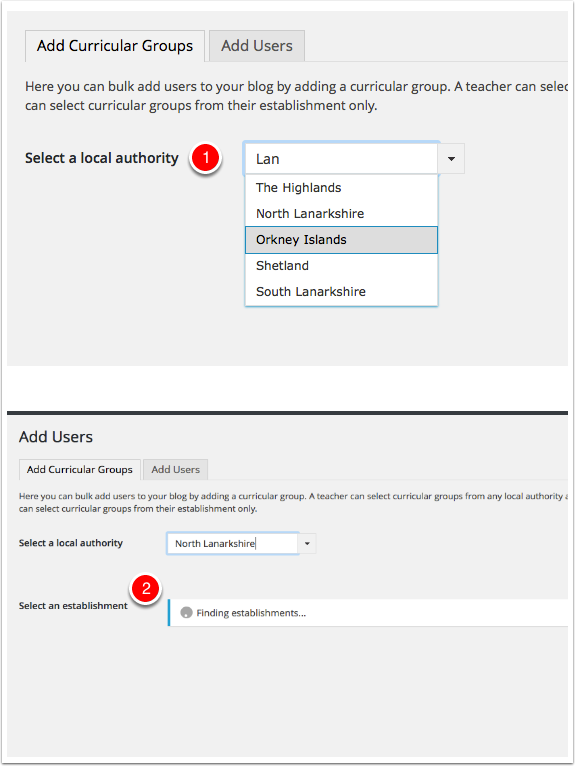 Once the Establishment Menu has loaded you can select form the list in the same way as above, either by filtering or selecting from the drop down menu. Once a selection has been made the curricular groups menu will load. 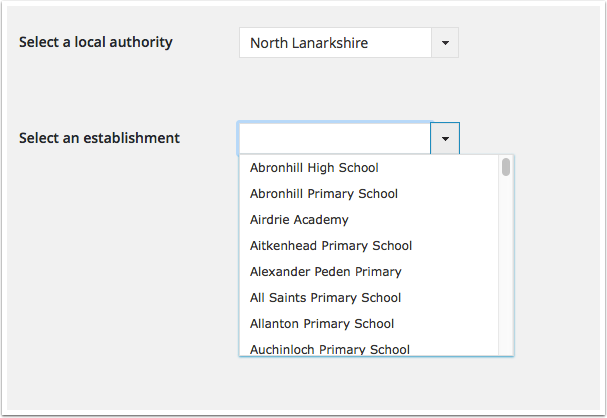 Once the Curricular groups are added these can be selected from the drop down or via filtering in the same manner. 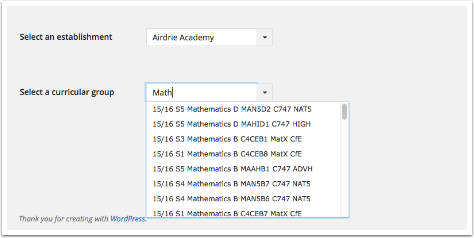 Adding Users from a Curricular Group

After the Curricular Group is selected the list of pupils in that group is displayed. All pupils in the list are selected ready to be given a role in the blog. The selection can be changed by checking the checkboxes[1] (or choosing Selet All | Deselect All [2]).

Once the selection is finished you need to give the pupils a Role[3] and click Add Selected Users[4]. 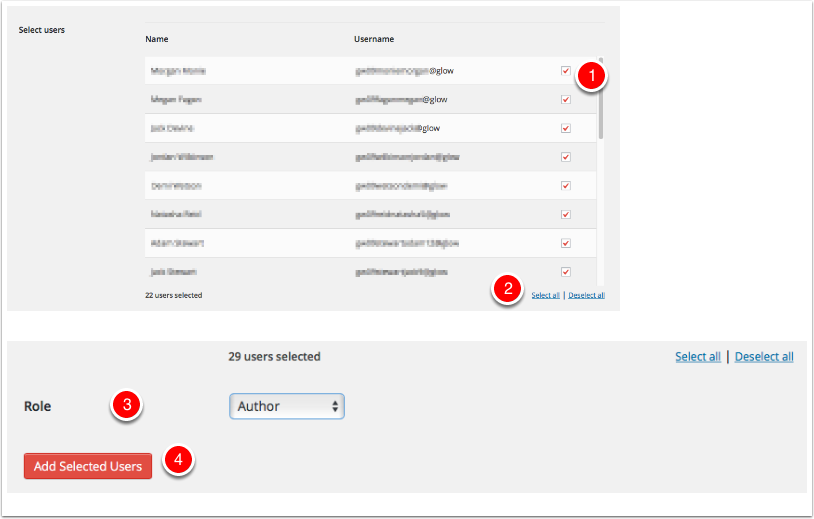 The Users are Added to the site

In addition to the Teaching Groups, there is a Group of all Teachers in the School. This can be found quickly by Typing teachers into the filter box.

Primary School pupils do not seem to be in Teaching groups , but are in Registration Groups which are currently not supplied via the API. Hopefully the Teachers list will be of use in primary classrooms. In may be possible that RM will ad Registration groups in the future, if so the blog service could be altered to use that data.

In most browsers you can copy the list of username selected as a semicolon delimitated list, by clicking the link below the list. The link will not appear in unsupported Browsers [1].

You can also add users via users names on the Second Tab of the Add Users page in the Dashboard.

To add users you

You will see a message at the top of the Add Users screen, to tell you the additon was successful.

Username optionally can have the @glow at the end of them. @glow will be added to any usernames without it automatically. 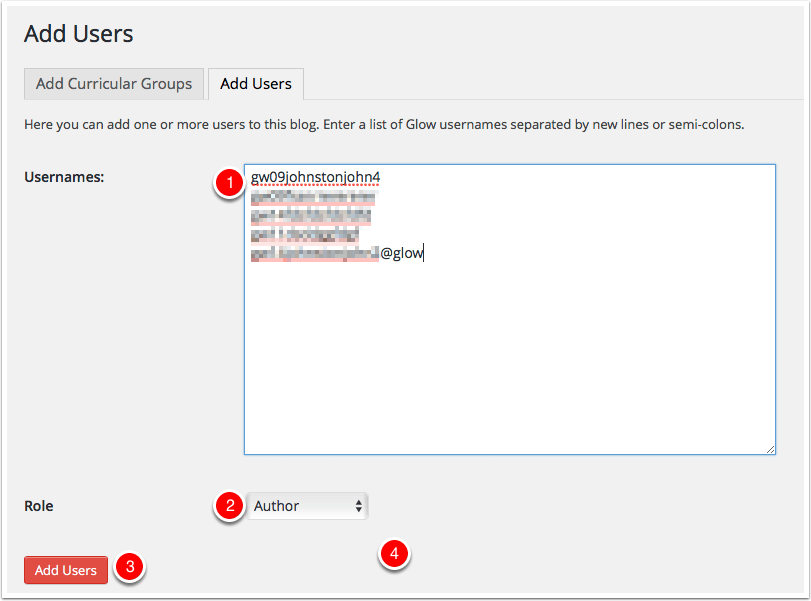 After users have been added to the blog they can be managed from the All Users screen [1].

You can view information about the users and change or remove their role on the blog.

Users that have been added who have not visited and logged into the blogs are added as pending [2]. Glow  users will have the account on the blogs service created when they visit the blog home page for their LA after clicking the tile in RM Unify or by logging on by click site admin on a blog or visiting a page on a Glow  only or privated blog.

Administrators can remove users from their blog or change their roles on this screen.

To remove a user:

You will be taken to the Delete Users screen where you can make decisions to delete the posts from the user or attribute then to another user. 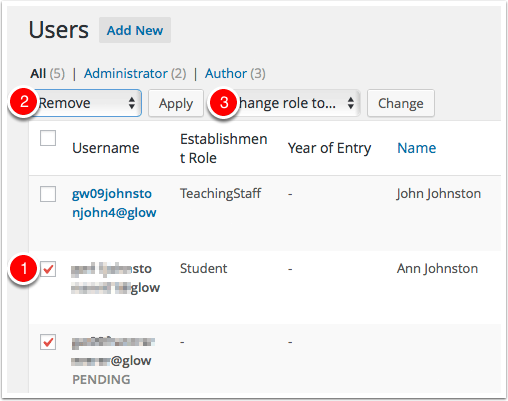 To change a users role

Roles are the top of the Author & Users Dashboard page. 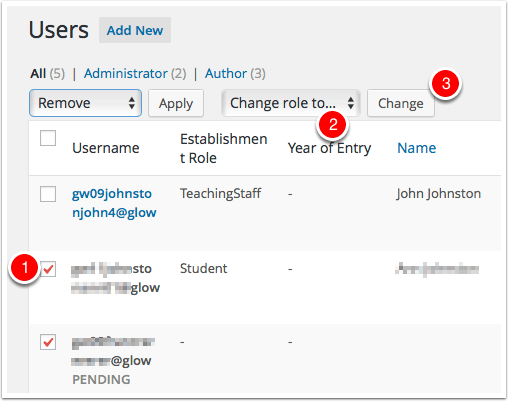 Removing yourself from a site (Teachers only)

There is not a native WordPress way to take yourself out of the users list on a site.

This can be inconvenient for staff who may be members of many ex-pupil’s portfolios. We have now developed a way of doing this.

It is carried out from the My Sites page. Each site now has a  Remove me from this site link. 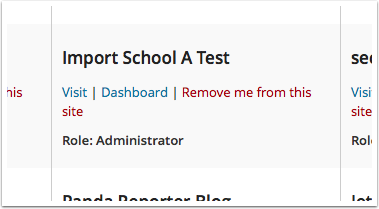 This information is shared under the terms of the Open Government Licence.
You may re-use this information free of charge in any format or medium as long as you include attribution.
These terms are compatible with the Creative Commons Attribution License 4.0 and the Open Data Commons Attribution License, both of which license copyright and database rights. This means that when the Information is adapted and licensed under either of those licences, you automatically satisfy the conditions of the OGL when you comply with the other licence. The OGLv3.0 is Open Definition compliant.

Text and images can be copied and documents either linked to or downloaded for redistribution.