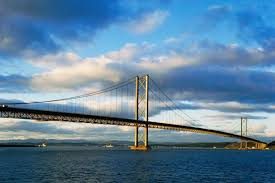 There are three bridges; The Forth Road Bridge is a suspension bridge, The Forth Bridge is cantilever and the new bridge, the Queensferry Crossing, is the longest cable stayed bridge in the world.  We found out that over 70,000 vehicles cross the bridge every day and over 24 million vehicles cross the bridge every year. It took around 6 years to build and seven people died building it. On the 5th December 2015 a small 2cm crack was found and the bridge had to be rebuilt. The bridge is 51 years old. It is owned and operated by Network Rail. It was the 4th longest bridge in the world when built. It cost about £19.5 million to build. It is Britian’s first all steel bridge and it used nearly 40,000 tonnes of steel and 125,000 cubic metres of concrete to build. The designers were Benjamin Baker and John Fowler. There is the new bridge that is being built which we will get to see. We will be visiting it next week, hope we have a great time. By Kaitlyn, Sarah and Ellie