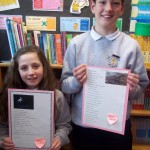 Every year the National Galleries of Scotland run a competition called Inspired? Get writing! for children and adults.  Port Ellen has 2 successful poems.  Abbie was a runner up with her Poem The Ghost Fiddler, inspired by a photo of Aly Bain by David Williams.  Asher achieved a special merit for his poem Old Defence, based on a painting of Inverlochy Castle by Horatio McCulloch.  Both have been invited to hear their poems read aloud at an awards ceremony at the Scottish National Gallery in Edinburgh on the 17th April.
Here are the two poems:

In the center of a humid room,
Sat a figure hunched close to his fiddle,
Moonlight gleaming, his body glows,
Body bitter and cold, heart scorched by music,
His instrument in gentle, airy hands, notes drift like phantoms.

The room awakens, comes alive,
Louder, louder, the room screams with anticipation,
Its eyes dance to the energetic melody,
The soft, faint feet are tapping, thumping the rhythm,
As the room dances to his tune.

Stop.
The room falls to a sudden stillness,
The majestic figure sits in complete silence again,
Drifting away into the dark,
Like his last notes fading into the heart of the room.

An elderly defence,
Confronting a forceful hill,
Protecting a village from destruction,
Now smoke stacks curl,
Weavers weave,
Fishermen fish just for fun,
Once mighty land of feasts and splendour,
Is now just a traveller’s rest.
The Loch is poisoned,
With a potion of inattention,
Blinding one’s eyes from danger,
Discarding the view of marching armies,
Watching for unclaimed lands,
The slumbering dragon rests behind,
In a million year slumber it reposes,
Preparing itself for plunder,
A storm gathering, engulfing the sky,
Like wisps of a snoring volcano,
Isolating the village from help.
As if on the banks of Loch Ness,
A stronghold remains searching,
For a long ago enemy,
Waiting for its time to strike.

On the 25th January it was Robert Burns day so Port Ellen Primary School had their annual Burns Ceilidh.  Robert Burns was a famous Scottish poet.  Every child learnt a  poem six children got through to the final were two judges would judge them .  This is all the people who got !st .

Every one who won had to say their poem at the ceilidh. At the ceilidh everyone done some Scottish Country Dancing while Neil played the accordion.  Some children in the school played  Scottish musical instruments.  Eilidh was on the accordion;Abbie on the fiddle;Maisie and Ruby on the tin whistle.  We didn’t only have people doing musical solos we also had highland dancers. You can listen to p7s poem (A mans a man for a that) at the bottom.

a mans a man

Friday 15th June; They are going to read their poems at the Gaelic College.

Eleanor says “I used all my feelings in my poem,”

Nicholas says “I thought really hard about my poem.”

On Friday 18th May Mrs MacDonald told us we had done really well in the life on Islay poetry competition. The man that ran the competition was called James Knox Whitter. The people that won in our school was Asher who came first and Nick who came third and the highly commended was me Eleanor and Scott.:) By Eleanor

Yesterday was Burns Day and we had a poetry competition in school. Each class had to recite their poem in front of judges, and here are the recordings of the winning recitals.

Primary 7 winner was Aileas with To a Mouse by Burns,

From Primary 6 we have Emily with Scots  by Robert Burns,

From Primary 5 Danni with Rose by Burns,

Rose
From Primary 4 the winner was Abbie, reading What Will I do Gin My Hoggie Dies by Robert Burns.
hoggie

From primary 3 the winner was Mirren who read Heron by JK Annand.

From primary 2 we have Natalie with Mondays Bairn,

A bird with the cold blood splatter on its wing tips
The blood of million men, the greatest warriors, slaughtered,
Still people battle the ancient beast,
It speaks with many voices,
But it always speaks of death.

A Viking Poem By Oliver P4 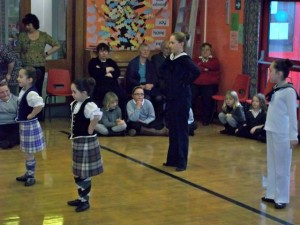 It was a celebration of Robert Burns on 25th January at Port Ellen Primary School. Children had spent weeks learning their poems to recite to the eminent judges on the day, and we couldn’t wait to see who won. We stopped early for lunch, which included the traditional Haggis, neeps and tatties. Mrs Carmichael said the traditional Burns lines over the haggis before it was served.

After lunch we held a ceilidh with parents attending for a dance and a song. Aileas entertained us on the fiddle, and the Highland Dancers were amazingly springy as they danced. The children have all been learning dancing, and it was great to see them dancing with their parents and friends to the Gay Gordans and Canadian Barn dance. The winners of the poetry competition were announced and were Murray in P1,Bronagh in P2, Abbie in P3, Maisie in P4, Ellen in P5, Aileas in P6 and Eilidh in p7. All in all a fantastic celebration of Scottish Culture.