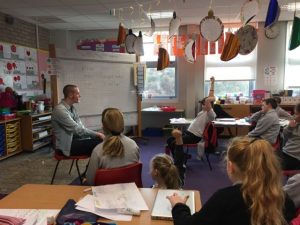 Just before Christmas P4/5 were thrilled to get a visit from Miss Heads nephew Luke, who is a geologist.  He answered lots of their questions about volcanoes and earthquakes.  He was also very impressed by the children’s knowledge of the earth’s structure and plate tectonics. 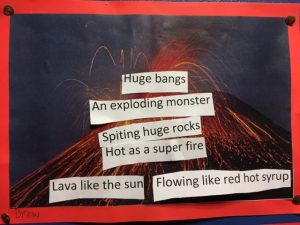 P4/5 are learning about poetry and figures of speech.  Here is Drew’s volcano poem using metaphor for the first time. 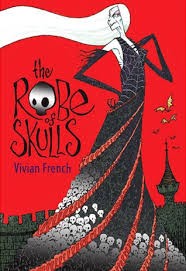 In September P567 started reciprocal reading groups.  My group was Joe,Eva and Kaya we were reading Vivian French’s book The Robe Of Skulls.  It was about a lady called Lady  Lamorna and she was a woman who was buying a dress with skulls on it.  She did not have enough money to buy it so she grabbed her assistant Gubble, he is a troll.  She told him to get two donkeys for a journey for getting gold from castles. Eventually they introduce a girl who gets locked in a basement because of her step father Mange.  Gracie’s mother had died so she lived her whole life also with her step sister except the whole story changes.  They go on a quest and everyone has fun.  I enjoyed reading this horror style fairytale.

Black Tide is a book by the author Caroline Clough and had lots of adventure. The main character is Toby and in the book he had to try to rescue his little sister Sylvie and his dad. They had been captured by invaders and held captive. All the people who are invaders had a NC tattoo on their wrist and Toby used that to tell who to stay away from because the invaders were after Toby as well. 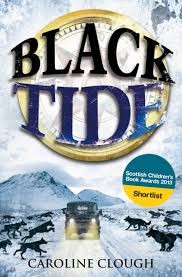 At the beginning Toby had been captured but managed to escape but he didn’t manage to save his family so all through the book he was making up plans to save Sylvie and his dad. He met a girl called Natasha but all her friends call her Tash. In the middle of the book there are dogs and Toby called the biggest, fluffiest, blackest dog Cerberus after Greek mythology.

The author is Caroline Clough and she came to our class for the book fair. It was amazing when she came in and she told us about her family and her childhood and how she became an author. She said there will be another book called Silver Seas and I am really excited about it coming out!

This is how you do reciprocal reading.

You read some of your book and  you choose an activity.  Then you write about it after that you talk about it to the rest of your group. The activities are Predicting, Clarifying,  Questioning, Summarizing, Connecting, Visualizing, Inferring, Evaluating.  This is how you get better at understanding what you read.  We are reading Cool by Michael Morpurgo.