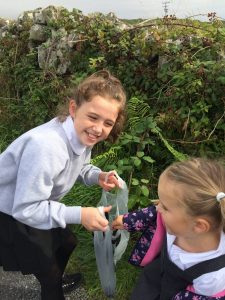 On Wednesday 7th September Mrs.Clark’s class and P1/2/3 went bramble picking at the croft road. There was 2 people in each pair and every pair was given 1  bag to put the brambles they find in. As we set off to get brambles a buildbase lorry went by and we all had to get on the grass and let the lorry pass. After the lorry was gone we started to pick the brambles and there was a lot of brambles found just at the start of the road. Matthew and his little brother William started to get further down the road. People were on left and right trying to get the biggest and most purple brambles so that they can make the best bramble jam. Ciaran was always at the front of all the people just because some people at the front said that they would get the most brambles because they were at the front. Closer to the end of the path there were more brambles but most of us decided to take out time because if we did that we could still find a lot of brambles which no one knows about.  We picked over 5Kg of brambles and made it into bramble jam.  Yum!