Yesterday I made flapjacks for Endeavour because it would be the last time I would be the last time making them for the class 🙁 So at lunchtime break me and one of my best friends started to measure the ingredients so then we cook them when other people are doing Endeavour. After we measured then melted them and after they melted we put the oats in and cooked them:) Then we ate them!!

Kaitlyn: Kaitlyn said they were delicious:)

Ruaraidh: Ruaraidh said they were the most delicious flapjacks he has ever had:)

Kaya: Kaya said they were fabulous:)

Katie: Katie said they were amazing:)

Murray: Murray said they were yummy!:) 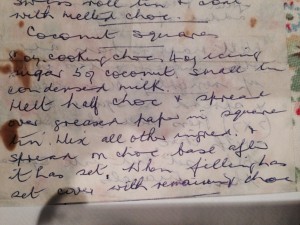 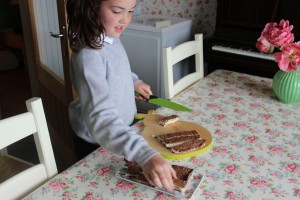 My mum found some old recipes from my Great Nana in her handwriting, they were quite hard to read but we managed to read them. I decided to try and make her Bounty Bars, they were delicious. You spread melted chocolate on some greaseproof paper and when its set you spread a mixture of icing sugar, condensed milk and coconut over it then pour another layer of melted chocolate and wait for it to set. They were so good, better than the shops!! I delivered some to Mrs MacDonald and she said they were lovely. 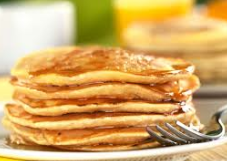 My Great Nana Gemmell was an excellent baker, she did pancake making displays at the Highland Show and received letters from as far away as Canada from ladies who saw her display and were now using her recipe. She won an award for her pancake making. I thought i would try making them in school and my friends really enjoyed them.

Today I thought I’d be a really good friend and make a birthday cake for my friend Mirren.  I asked her what kind of cake she wanted and she said a Victoria sponge.  So I made some cupcakes and a cake for her and my class are going to have a wee party tomorrow at the end of the day.

To celebrate the birth of Britain’s newest Royal baby – Princess Charlotte, I decided to make princess Charlotte cookies. They were chocolate chip cookies with a Jelly baby on the side. I made enough for the whole school and everybody loved them.

One day my Auntie made marshmallow log and I loved it:) So the next time she wanted to make it she  thought she would bring the ingredients up to my house and teach me how to make it.  The ingredients are:  Marshmallows, Condensed Milk, Coconut and Digestives.  I really enjoyed making mallow log with my Auntie 🙂

Mrs MacDonald asked me to make cupcakes and flapjacks for Eilidh and Anna’s 16th birthday. We had to make them the day before and deliver them on the day as a suprise 🙂 They loved them:) xx END_OF_DOCUMENT_TOKEN_TO_BE_REPLACED

Last week I made healthy tuck and I sold them for 20p. I just made plain ones, the recipe is the BBC Good Food Victoria Sponge  recipe made in to cupcakes! Then I decorated  them by putting icing sugar and strawberries on them! I asked Katie, Mirren and Ross if they liked them and they said they really liked them:)

Mix all ingredients together and put them in the tin or cupcake cases and bake for 20minutes . 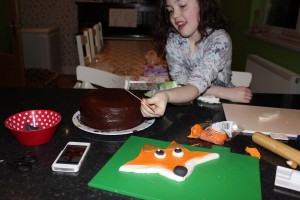 On Friday the 6th of February after school me and my mum were very, very busy. We were busy making my friends birthday cake for Saturday. We made twelve little muffins and one big cake. It was a chocolate cake with chocolate icing and on top of that was a fox made out of icing:) It was very hard to make!!

It is an amazing recipe:) 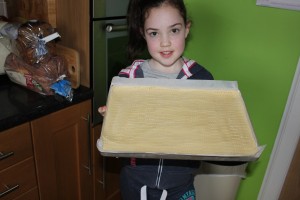 On Friday 23rd of January we had a Burns ceilidh, and I offered to make shortbread and the headteacher said yes. So the week beginning 19th I got all the ingredients ready and I started to prepare my shortbread. Then after I mixed all the ingredients in the bowl, I pushed it in to the tray and put it in the oven. Then the next day I made more shortbread in school before the ceilidh and when it was still really hot and in the oven my friend Eva walked in and she said it smelt like heaven! So I took it down where the ceilidh was going to be. Then at the ceilidh after some of the entertainments when it was half time everybody said they loved it:) So that was good:)