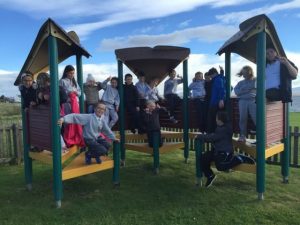 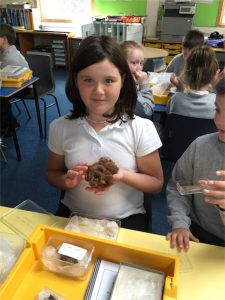 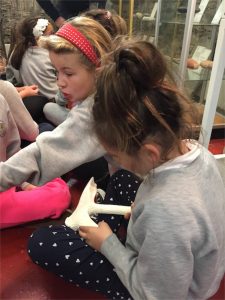 Yesterday P4/5 went to Port Charlotte. First we went to Port Mor swing park to have a play and then we went to see the chambered cairn that is in the field. I thought that it was pretty amazing that it is still there even after thousands of years.

Then we went to the museum and it was fun because we got to hold all the flint and stone hammers. There was a bit deer antler that was used as a hammer. I quite liked that we got to see the other things like the big huge lightbulb and the things from World War 2. Mara told the museum about her Grandpa Hector’s stone that he donated to the museum and they printed her off a copy of the Object Report. It said it was a flat stone with a carved cross.

After the museum we went to Port Charlotte school and we had lunch and a wee play the students showed us some Mesolithic bones and sheep hair from the past and broken pieces of pot .

By Mara and Ellen 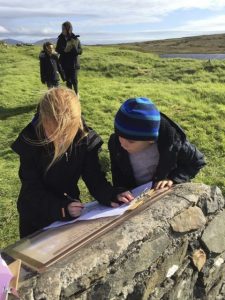 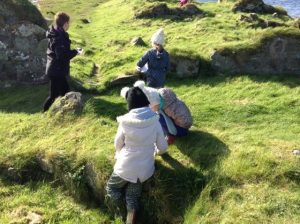 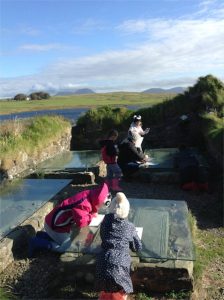 On our trip we went to Finlaggan and it was so nice. When we got there, there was a little cottage. It was a light brown and it looked brilliant. Me, Orla and Dearbhla got out of the car and hid next to another car to hide from the people in the mini bus. Everyone went in to the cottage and we met Mr Bell and Mr McCowan. We talked about Finlaggan and then we went to the islands.

At the little island there was once a big grey house and a Great Hall. It was amazing and cool because people where living there 1,000’s of years ago. We were put in to two groups, we went around the little Island there were lots of signs around the Island that told us lots of facts. Our group leader was Mr. McCowan. We saw old ruins and the old graveslabs. We saw where the well was and where the kitchen would have been.

After we had had the tour we got put into three groups to do some investigating of our own.  We had to do measuring, maps and art.  It was soon time for lunch which we had in the cottage.  We also had a chance to look at some of the things that had been found during digs at Finlaggan.  The most interesting thing I saw was the Lord of the Isles home.

Before we headed back to school Mr McCowan and Mr Bell gave us some crunchy M and M’s – a tasty end to a great day! 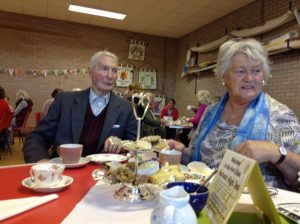 On the 12th of October at Port Ellen Primary School we had a Harvest Tea for the pensioners in the village. All the children baked cakes for all the pensioners, including ginger biscuits and tray bakes from P45, scones from P123 and iced buns from P567.  They enjoyed listening to Port Ellen Gaelic choir and solos and poems from some of the pupils who are going to the Mod.  P5/6/7 came down to join them and we chatted with the pensioners and we got to know them and we asked them what their school was like when they were younger and other different questions. While we chatted with them, Primary 45 read out some harvest poems they had written. P123 also read out what they had written about harvest, and they had made some lovely bunting for decoration.  Next year we decided to do a bingo for everyone who comes! Everyone will hopefully take part next year as everyone had a great time and had a good laugh! 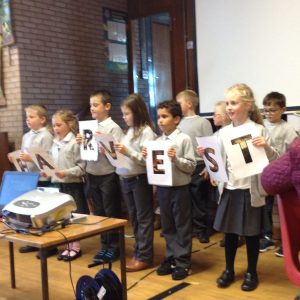 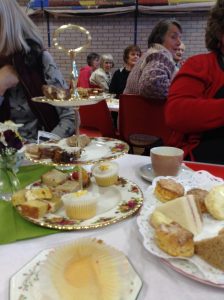