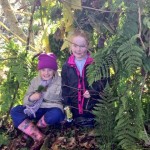 On Thursday 24th of October we went to Cairnmore woods to have a Mesolithic day.   We did lots of challenges like hunt for food and we also had to make a journey stick. That’s when we wrap a stick in twine and take wee bits and bobs from the day and put it in the bits of twine so our group took a leaf and some bracken.  We also built shelters, mini camps and told our Mesolithic stories.

We had a Glow Meet on the 28th January down at Miss Macrae’s class room. We where talking to all sorts of workers that work there in the National Museum of Scotland; they were Designers, Exhibition Officer, Curator and a Conservator. The Designer designs everything that involves stuff like pictures. The Exhibition Officer needs to make sure that they only have 25 words or less on the tag and they need to make sure that they is a lot of facts. The Exhibits can be all the same or they can be all different things. A Curator is someone who looks after all the old things that goes in the Museum. You can find things if your on a walk on the beech or the woods or any other places that you might find some things. I thought the meet was very good because I got to learn all the different jobs there are in running a museum.
Maisie 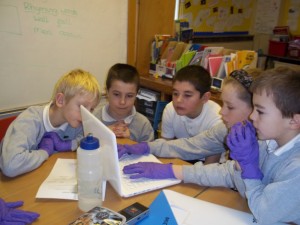 St Columba came over to Scotland from Ireland in 563 AD to found a monastery on Iona. We have been hearing his life story as recorded in a book written 100 years after his death by another monk Aiden. Working in pairs to create large collages of different points in his life helped us tell his story. We also wrote a story from the life of Columba in the style of an illuminated manusscript like the book of Kells. Here are some of the stories.

Columba and the Loch Ness Monster 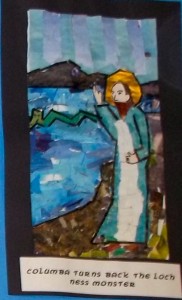 One night when Columba and the other monks were travelling over Loch Ness they heard wailing which often meant a death. When they got to the other side there was a funeral was tacking place.
When Columba asked what had happened a young man replied
“My dad was killed by the monster.” Columba cave him a suspicious look. He turned to Luna and said
“Swim over to the other side and get me that boat!”
Luna slipped off his sandals and took off his cloak and plunged into the water. He was about half way across when he saw the monster.
Just as it went for him Columba ran into the water and made the sign of the cross. He forced it to leave. The monster never entered the waters again. 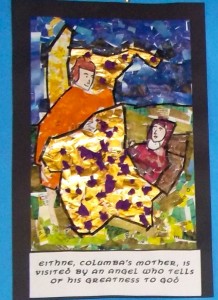 One night an old man was dying in a monastery and said Eithne, your son will be a great Christian and visit my grave. That night an angel came to visit Eithne with a beautiful cloak full of flowers. The angel said it’s not yours to keep. Eithne was crying because she couldn’t keep the cloak.  Then she gave birth to Columba, who was special.
Eithne gave Columba to the monks for God and so she can go to heaven. She could only visit him1 time a month, but still loved him.
Columba heard some boys outside shouting Colm Cille, churchy Colm. Columba got really angry and chased them down to the river.  But he grew up to be a very famous Christian.

INTRODUCTION
In the time of Columba back in the 6th century Scotland wasn’t the same as today. Columba founded lots of monasteries to let people learn about God. He founded one on Iona in Scotland.
PEOPLE IN SCOTLAND
The Picts, Gaels and Britons. The Picts are warlike and very vicious. They speak a welsh like language. They lived in the North and East of Scotland. The Britons spoke welsh too. The Gaels spoke Gaelic and were Christian and warlike. They lived in western Scotland and they came from Ireland. They had very neat art and carvings. Columba crowned the king of the Gaels.
EVERYDAY LIFE
They lived in big round houses, and they ate meat and vegetables and barley. They used sheep wool to make clothes. Some houses were on top of water.
By Robbie