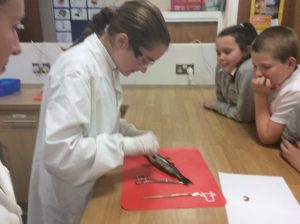 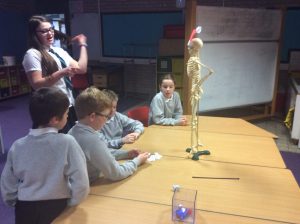 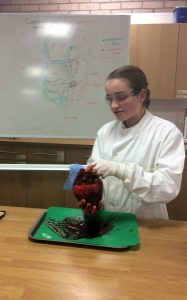 On every Wednesday at school we have a science club. On the first week of science club we had to find out who put a white powder in Mrs. Clark’s hot chocolate. It was great fun. We had to find it by going to different parts of the kitchen and finding out whose mark matches the criminals mark. There was finger prints, bites on cups and we had to see what what pen was the same as the one the criminal used. The second week we got to make crystals. We made the crystals by putting in over salted water and food coloring to make them look good. On the last week of science club it was really disgusting because we were dissecting a fish and at the very end we dissected a deer heart. Although earlier before we were naming body parts and we got 2 chocolates out of an advent calender. We would like to thank the people from the high school  for coming over to help us and we would really like it if science club is on again.