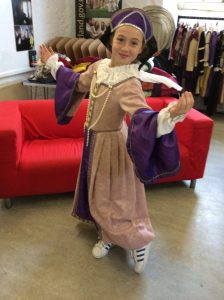 On Wednesday the 14th of September, P6/7 from all the schools on Islay and Jura went to Stirling Castle. We had to walk up a small hill just to get to the castle. When we got up to the castle we had to go into the middle of the courtyard. Then we got told by a tour guide just to go up to the main hall and wait until the woman came and told us to follow her and then we went into the grand hall. We were told that the grand hall was used for when the king was having his dinner. It was also used for dancing and it was used for the servants to sleep in. Then the woman took us over to the palace. The palace had two rooms in it. One room held all the people that the king had requested to meet. But the king only picked some of the people to meet in the other room. If you were very special you got to meet in his bedroom. The queen had the same thing two rooms and a bedroom. Then we got to go into a room when we got to dress up as characters from Mary queen of Scots times and Robert the Bruce. Then we went back to the bus and we drove off to the Bannockburn centre