Most of P6/7 from Islay and Jura went on the Stirling trip on the 13th till the 16th of September. 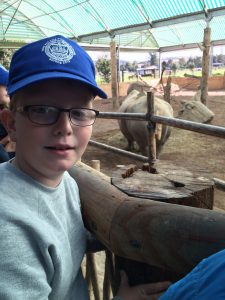 One of my favourite parts was going to Blair Drummond Safari Park so that’s what I’m writing about today.

Me and my group  (Mrs Mactaggert, Anna, Lorne, Ewan, Toby, Daisy, Ryan and Sam) started of at at the Elephant (Mandy) and it was very interesting then we went into the Rhino section. Bruce the Rhino’s Mum Dot was pregnant with her fourth calf. We also looked at giraffes  but they were quite boring because they were just standing there.  After that we went to look at the lions and we saw a male lion eating a calf. We then headed to the horses and the two tigers after we got to go see penguins, meerkats and sea lions. Next we went to the park and played with the amazing, gigantic wooden castle. Soon after we drove through the open space where all of the animals were in the bus. My favourite animal I saw in the bus was the zebra then sadly after we had to leave to get to the ferry.