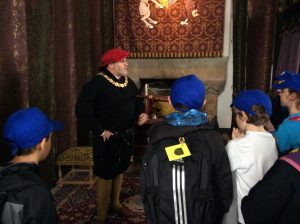 When P6/7 were in Stirling we went to go and see Stirling Castle and when we got there it was like wasp heaven, there were wasps everywhere. When we went into the castle we went to these wee rooms and we went in for about five minutes in the rooms. There was one that was very fun it was like a dressing up room I was dressed up like a queen. Then we went into the Kings room and it was all empty the reason that it was empty because the King did not get to live in the castle he died when it was just about finished. Then we went into the Queens room and then we met two men and one of the men were talking to us about the castle and the other one was playing a lute. After that we went into the outer room and people went in there to speak to the King after we went into the inner room only the important people got to go  in there. After we had been through all of the rooms we went to the learning room and we had to get changed into a dress and we had to tell if we were in Mary Queen of Scot’s times or her fathers times and I was in Mary Queen of Scot’s fathers times and then after that we had our lunch. Then, sadly we had to leave.  I really enjoyed Stirling Castle and I would really want to go back.