We are doing a history topic and we are trying to make our own museum and I brought in some medals from the War. They belonged to a man named Charlie Baum who was in the ambulance association and was killed while going to pick up a body. He got the medals for being part of the War and saving people’s lives. My Grandad got the medals sent to him as he was a relative. He even got parts of Charlie Baum’s clothing and other things. 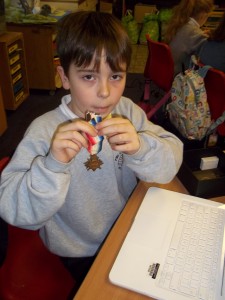