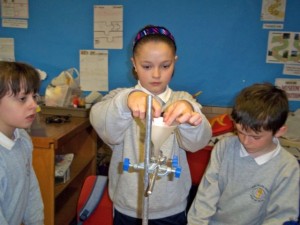 By James and Ellen

This term we are learning creation stories and doing puppet shows and shadow puppets. One of the creation stories is about how the world came from an egg, a dog breaks out of the egg and he holds up the sky, his tears fill the streams and rivers and seas. Another creation story is how the turtle carried the world, we are using shadow puppets to act the scenes out, well there was a sky city up in the clouds and there was a hole in the sky and sky women fell down and nearly drowns but then 2 swans flew up and caught her, then some animals went under the water but couldn’t bring any mud up, then the grandmother toad went under and brought up mud and place it on the turtles back. Now the puppet show, there is 5 puppets one is called Bob that is very crazy because he makes weird noises, there is Jim who is the clever one and does all the research, there is Killer who wants to eat the humans so him and his gang can RULE THE WORLD!!!!!!!!!, Fred talks very slow because he is the thickest out the lot and finally Zob is the one that has a deep voice and always says dude after every word he says. They want to find out about all the different creation stories.

How to make a shadow puppet.
First you draw any animal or any sea creature then you cut it out. Then you can get a bit of clay or any soft object to pot under your thing.
After that you get a pencil then you pop the holes out of your object.
Finally you put your object in front of a Projector or a screen.
by Alicia

On the 18th March 2011 was comic relief day or some people call it red nose day. Port Ellen Primary School did loads for red nose 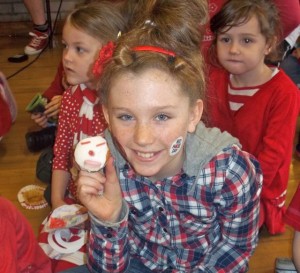 day. The first thing we did was have a Glow meet with schools all over Scotland. We had a bit of a difficult time because every one kept moving the pods so we only had our turn then we turned off the camera and returned to our red day. Every one dressed up as some thing red just by wearing some thing red. We then had a beach clean in the afternoon and every one went in to groups. I was in group 1 and we went first to go round the street to get money from people for red nose day while every one else cleaned the beach. Aileas and Erin were really good at stopping cars and getting money of them.

All together we raised a whopping £700.

P1/2 had a circus on Tuesday 22nd March for their end of topic. 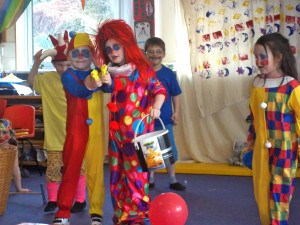 Darren was a snake charmer and the hula hoopers were Katie, Sturan and Bronagh. There was lots of gymnastics and a lion tamer. The clowns were extremely funny. It was very entertaining and at the the end they started spraying water at us and other stuff. It was fantastic!!! 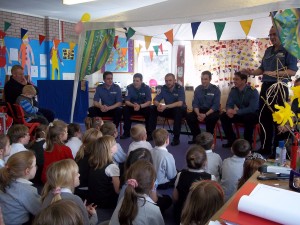 On the 23 of March some people came in to talk to us about submarines. There was a lot of information. The royal navy submarine was the same length as a football pitch. They had no phones so they could not contact their family. And they had to share a bathroom, and a bed, but not at the same time! I think it would be not good to be in a submarine. Because they didn’t get to contact their family. The royal navy helped us with our round house. They painted our benches brown. We got some gifts from them. We got a hat and a picture of their submarine and a sticker. I thought it was brilliant.
By Alicia

On Tuesday 22nd March P1/2 held their very own circus show. To prepare for our show we brought in colourful clothes to wear for our costumes and we made hats. We made posters and tickets so that everyone knew about our show. Tink and Jeremy came to help us rehearse for our show and we worked really hard to make it the best it could be.
We were feeling very excited about performing our circus act especially once we got into our costumes and got our faces painted!
The whole school came to watch and they all seemed to love it!
Ronan, Julie and Ellie were clowns.
Mirren, Eva and Caitlin were acrobats.
Finlay was a juggler.
Bronagh, Struan and Katie were hula hoopers.
Ross worked with Jeremy to be a Ring Master and he was also a scary tiger.
Darren was a snake charmer!
Ruaraidh thinks it was great fun doing our circus show.
Bronagh liked performing her act and says it made her feel good.
Ronan felt nervous but he enjoyed it!

China’s creation story is about a dog called Pangu. Pangu was in a egg and like all normal animals in eggs he broke out with an axe, the gooey stuff spilled out and became the earth. Pangu created the world.  Pangu’s hair was the stars, his eyes were the moon and sun, the plants were made of his skin and the rain, the sweet rain was made of spit. 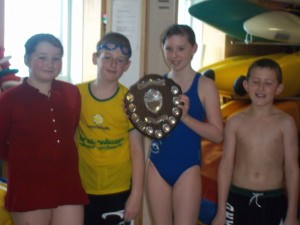 At the swimming gala we had a lot of races including front crawl, backstroke, obstacle course and the relay. Orsay got in the lead early by winning races and stayed there and won the gala in points, but came second in the relay with Texa coming in 1st in the relay and Nave came 3rd in the relay. In the points Orsay came 1st Texa in 2nd and Nave in 3rd. 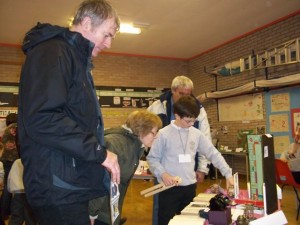 On Tuesday 8th march 2011 p4\5 held a museum exhibition. It started at 1:30 to 3:00. We held it because our topic was on history. In the morning Bowmore P5\6 came over to look at our museum. We all had had a different table to work at. I was at the information desk with Eilidh. We were selling bookmarks,delft tiles and leaflets. There was a desk that you could go to try old food like Dundee cake,oatcakes with goats cheese and venison and there was viking bread. I had a bit of Dundee cake and it was very nice. We had interactive displays and timelines, toys, bedrooms and kitchens from the past. P6/7 did a World War 2 display as well. A lot of adults came to see our museum. I had a great time.