There was a lot of excitement in P1/2 on Tuesday when we discovered that Alexander was a runner up in the Name a Gritter competition, which was open to all schools throughout Shetland. He entered the name Snow Boss and joined 5 winners and 4 other runners up from around Shetland at a presentation at Nesting Primary on Monday afternoon.

Look at all of the things he won! He also won a sledge, but it was a little too big to bring into school! 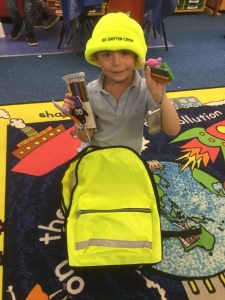 Well done to Archie who won one of the prizes for our World Book Day competition!  It must have been so hard to pick a winner!  Well done to all who entered.

We enjoyed celebrating World Book Day today and were delighted that Mrs Fiona Henderson could be with us to celebrate too!  Our day started in the Library where we got to change our books.  Then we looked at all the tatties, fruits and stones that pupils decorated as their favourite story characters.  The winners are yet to be announced!  We had a special Assembly where we did a quiz and were handed out our £1 book tokens.  Mrs Henderson read us a story but didn’t tell us the title or show us the cover.  We went back to class to draw and write down our own ideas.  We all enjoyed celebrating the joy of reading!

Well done to Kate and Arthur who had their galley shield designs picked out by Mr. Ian Bray, the 2018 South Mainland Jarl.  They will help to make up their shields ready to decorate our school galley.  Watch this space to see the end results! 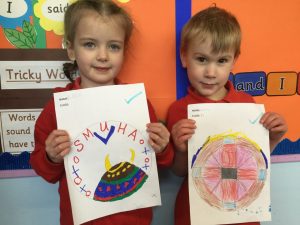 One of our P2 pupils has had an exciting morning today!  Roma was a runner up in the “Name A Gritter Competition” and has been to Tingwall Primary School to collect her prize.  Her winning entry “Snow Blaster” won her a sledge, winter hat and a goody bag.  Well done Roma!!