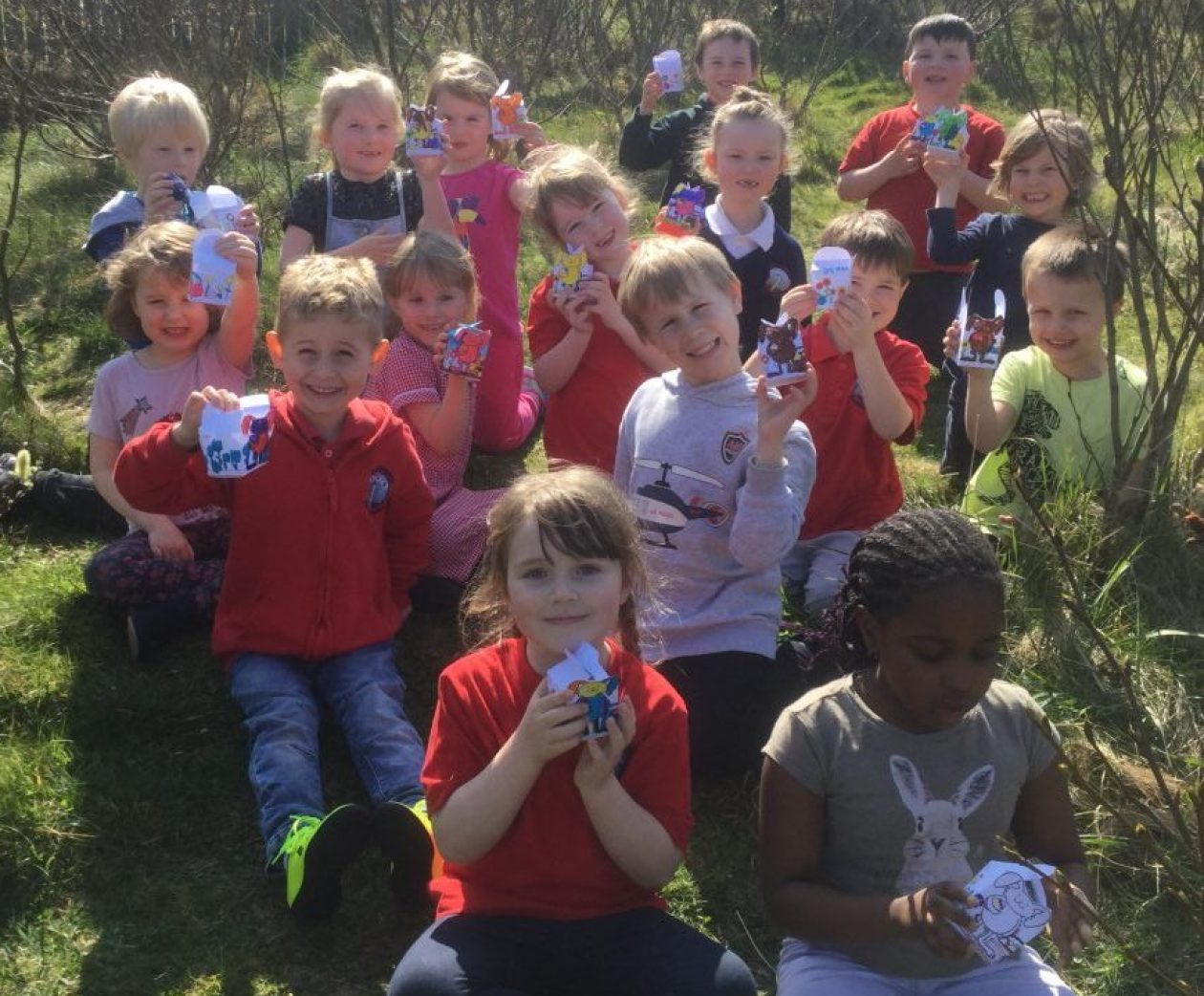 P1/2 have worked hard on the last day of term sequencing the main parts of the Easter story and noting down important words that would help them retell it later.  In the afternoon, they deserved a run around the garden area having an Easter egg hunt.  Happy Easter everyone!  See you all on the 18th April.

Thank you to everyone who came along to our French afternoon on Wednesday.  We had a busy morning drumming in assembly, but then got straight to work preparing the classroom for an afternoon with family and friends and of course some French treats too!

P1/2 have been using the laptops to research French food this term as part of their Food topic.  Some food sounded really yummy – macarons, crepes, baguettes and tarte tatin just to name a few.   Others were a bit surprising.  Have you ever tried frogs legs and snails?!

We decided that we wanted to try making some of the yummy treats for family and friends to enjoy.  Once we found some simple recipes, we wrote shopping lists and began the preparations for our French afternoon.  Invitations were made and sent out.  Then it was time to begin making and baking!  We also made a milk chocolate tarte and a white chocolate tarte but forgot to take photos!!

P1/2 have been learning about money during Maths time and while at play.  Our gallery of photos show some of the practical activities they’ve been doing.

What a busy day we’ve had in  P1/2!  It started off with a drumming assembly with Joy Duncan.  P1/2 were on first and what a brilliant opening act!  Well done everyone for your enthusiasm and focus to play the correct rhythm.

Since World Book Day, P1/2 have been enjoying the challenges of reading all sorts of different texts at home and at school.  They are enjoying reading alone, with a partner and in small groups.  They have been really keen to share their reading with the class and have written book reviews at home to tell us all about their favourite stories.  Please look through our gallery of photos.  It is clear to see the enjoyment, concentration, peer support  and potential for learning.

We’ve had a splendid day!  Beautiful weather for our procession to see the galley burning, squad acts that had us all giggling and topping the day off with the SMUHA Jarl Squad visit in the afternoon.  Here are some of our photos from the day.

P1/2 have been busy making helmets and torches ready for the South Mainland Up-Helly-Aa celebrations.  They have also worked on various cutting and painting projects to help decorate the dining hall and corridors.  We took a class photo beside the school galley, “Fivla” today.  I think they look the part!  Looking forward to our school procession and galley burning tomorrow and a visit from the jarl squad in the afternoon.

Well that’s our 4 week block finished and I have really loved sharing what I know about sign language with the P1-4 pupils!  I am so impressed to see how much they have learned in such a short space of time and have encouraged them to keep their new-found skills up at home!  There is a link below for the website we have enjoyed using during our 4 week block that shows the alphabet, has a signing dictionary and has games to play.

Today, we also watched this short advert that shows how a young, deaf man’s day was transformed when he surprisingly met a number of people in the community who could sign.  I wish each day could be like this for him.  Keep up the signing.  You never know when you might need it!

We celebrated Shrove Tuesday (or Pancake Day) this week by making crepes.  We have been learning about French food in class and found a recipe online that we could use.

We have been learning how to follow a recipe, measure out the ingredients and take turns.  Thank you to Mrs Casey for helping us to cook them, they were yummy!