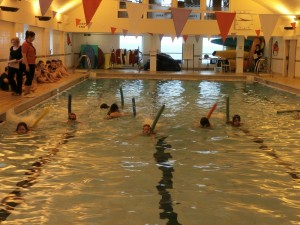 On the 8th march Port Ellen Primary had their annual swimming gala, for the first time everybody actually took part in some form of swimming a race!

From a young age of 5 to 12, everybody was able to swim a length, width or half a length!

We have a relay race with our three houses, Orsay, Nave and Texa.

So in conclusion, everybody had a great morning and we had a really nice lunch to go back to!!