WOW P3!!!    Mrs. Dundas, Miss MacKay and I are amazed at the ideas you have had for learning together with your family at home. You have been so inventive.  You are sharing your learning in such interesting ways. It’s lovely to see brothers and sisters learning together and helping each other.

We are looking forward to seeing what you think of next.

If you haven’t yet shared your learning with us we’d love to hear from you. Lots of love from Mrs Thomson and Mrs Dundas.

Patience!
Not sure what that means? It means being able to wait without getting annoyed.

I am learning that this doesn’t always happen. Patience is important to have right now. I will continue to work on my patience and I hope you will too.
Love, Mrs Dundas

Boys and girls I am having a great time reading our shared learning page. Your work is great. I hope you are enjoying family time too.

Some pupils will make up times tables problems like the one Zara Lavin made up. Can you try to answer them on the shared page? I think you can – I am learning so much new technology!! I can now use Zoom and am beginning to use Teams and Padlet, Wow!

I have enjoyed reading your information reports about Sharks and thought you would do so here is a selection.

Look for – a title, a general statement, a description and an evaluation.

Sharks are types of fish.

Sharks breathe through gills. Sharks don’t have bones, instead they have cartilage, what human nose and ears are made of. There are 500 types of shark. A group of sharks is called a school or shoal.

A shark is a type of fish.

Sharks can be deadly. Sometimes sharks think surfboards are seals so they might take the board. Sharks can hear fish moving 400m away. They can also smell fish from 500m away. Sharks breathe through a thing called gills. There are 500 types of sharks like hammerhead, white and blue. Sharks have a spiky thing on his or her back called a fin. They have a bit at the back, it is to help them swim. They can see in the dark.

I think sharks are good.

Sharks are a type of fish.

I think sharks are amazing creatures.

This will tell you about sharks.

It can hear 500m away. It can smell 400m away. Sharks eat squids and crabs and dolphins. It hunts fish normally. Sharks have sharp teeth. Sharks are clever fish. Sharks are carnivores. Shark groups are called schools.

I think sharks are great.

Sharks are a type of fish.

They can smell blood from 400m away. They can hear a fish move from 500m away. Big sharks eat other sharks, sea lions, dolphins and small whales. Small sharks eat squid, crab and clams. A group of sharks is called a school. Sharks breathe out of their gills. If they stop moving they will die. There are 500 types of sharks such as hammerhead, tiger shark, great white shark and grey reef shark. Sharks live in the ocean.

I think sharks are fascinating.

This will tell you about sharks.

A shark can smell a drop of blood. Sharks use their gills to breathe. Sharks can hear fish from 500m away. There are 500 different types of shark. Scientists believe that sharks have been in our ocean for 455 million years.

Mrs. Thomson and Mrs. Dundas hope that P3 are all well and keeping safe.

We hope that you will keep in touch with us all and share what you have been doing at home.  You can do this by adding your work to the Shared Learning Page, by commenting on the blog or by emailing us.

We hope you enjoy doing fun things with your family in this extra time at home and look forward to seeing all your great ideas.

This term we have been learning about coding. We have been using beebots, online computer programs such as Textease Turtle and Dance Party. 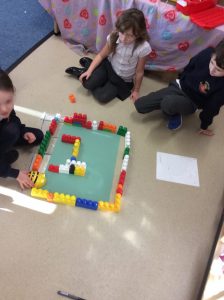 During our Topic lessons, we have been learning about school now and in the past. We have enjoyed learning about the history of Kingsland Primary School.

We enjoyed looking through old pictures of Kingsland and spotted some familiar teachers. 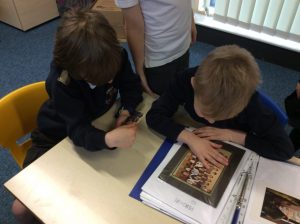 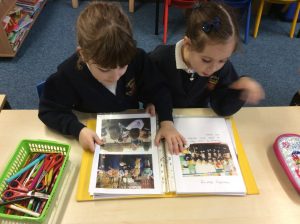 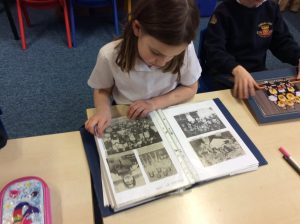 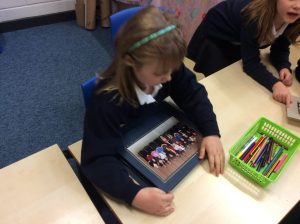 We also created life sized school children and teachers of the past. Here is a picture of some of the girls tracing around Beth. 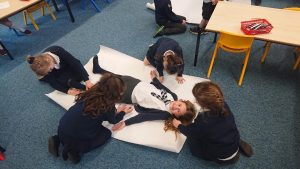 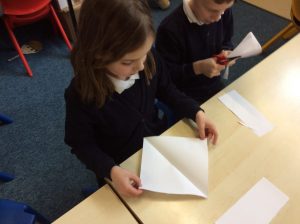 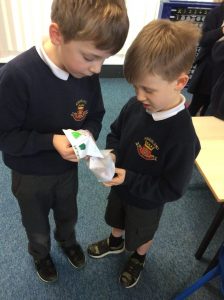 In Maths, we have been learning about tessellation (tiling). We explored different shapes to find out if they would fit together with no spaces between. We enjoyed working together and eventually creating a tessellation painting which is displayed on our classroom wall.

Here are some pictures of us during the process.