Primary 3 took part in a litter pick today in Colliston Park. This was part of their topic work about ‘Our Community.’ The children did a great job and also recorded their findings on survey sheets. We are pleased that the litter was not that evident today. Mrs Wixon who organised the event is very grateful to Solway Firth Partnership for the use of their litter pickers and bag hoops. Mrs Howie was also pleased to accompany the children for this activity as it relates to the school’s eco work where litter is an important topic. 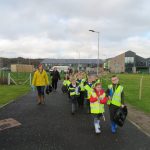 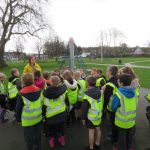 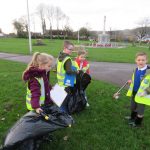 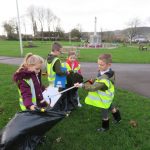 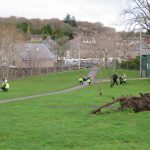 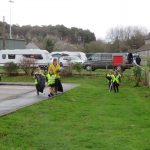 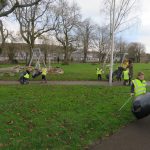 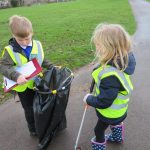 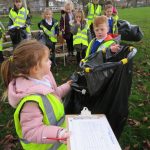 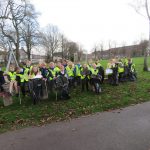 Having moved into their new campus around a year ago Dalbeattie Primary Eco Group is keen to keep it looking clean & tidy. To keep up the standards they have relaunched their litter awareness topic.

Last week the Community Safety Team were out and about on one of their engagement days and visited the primary school.

The Eco Group learned about litter and it effect on their local community. They surveyed their school grounds for litter and found some: mostly sweets and crisp packets. It was actually quiet tidy. However, the process was good for the children to understand the type of survey sheets which can be used to grade the appearance of an area in terms of litter.

These type of surveys are carried out three times a year by Keep Scotland Beautiful and determines how clean our roads and streets are compared to other local authority areas in Scotland.

The children learned that litter, especially those plastic in nature often finds its way into a watercourse and end up in the sea, often having a devastating effect on sea creatures.

At their old school, they were often plagued by dog fouling, but with having a secure playground now, they no longer have this issue.

The Eco Group believe that we all need to work together to keep our area clean & tidy.

This week saw lots of busy diggers in the grounds of Dalbeattie Primary School thanks to a bunch of hardworking volunteers who helped complete the final part of a project which was started in the spring. Dalbeattie Primary has fantastic areas for outdoor learning but the task of filling our 11 very large planters with plant stock for the first time was no little task. As the school also has a large allotment area with raised beds and a polytunnel for growing vegetables, it was decided to stock the 11 class planters with herbaceous plants which the children can weed and tend to over the years to come. However, such plants can be expensive so Dalbeattie Rotary Club of Dalbeattie came to the rescue with a fund of £750 to finance an initial order after the club was contacted by the school’s Eco Group. Also crucial to the project’s success has been the generous help and advice of Dumfries and Galloway Grounds staff Caroline McLachlan and Brian McAvennie. Brian very kindly offered to take delivery of our plants back in April and, with his dedicated team, has potted them up and cared for them all summer so that they would be better established for us to plant out in the autumn. Last Monday, the plants arrived back. It was amazing to see the size they had grown to; we are so grateful because with the summer we had, we would surely have lost the majority of the young plants without Brian’s help. Meanwhile, parent volunteers carried out the heavy work of weeding and digging over the planters before progressing to planting out. We are also very grateful to Wilkos in Castle Douglas for 10 bags of free compost and to BSW Timber who will be supplying us with bark. It’s been a busy week but the school is so grateful to our team of trusty volunteers: Andy Kalotka, Mr McMorran, Alison Houston, Simon Mein, Susan Robertson, Fiona Anderson, Ruaridh Benson, Laura Dickie, John Boynton, Fran Drummond, Lee Maxwell, Emma McGuire, Pamela Caldow, Victoria Cameron and Gayle Cooper. Thank you all!

Recently, the school’s eco group met with Nic Coombey of Solway Firth Partnership to carry out a beach clean at Rockcliffe beach. before setting off on their mission to find things, the pupils first learned about the problems of plastic waste getting into our oceans.

The Eco group recently went to Colliston Park to plant red, white and blue flowers to create a special bed to commemorate the Armed Forces in the year we mark the 100 year anniversary of the end of WW1. Thanks to Margaret Copp for organising the plants. We do hope the design comes into flower according to the design!

Today we had a visit from Jack Wootton from Galloway Fisheries Trust with some real live Sparling! Our Primary 5 Class and Eco Group were very pleased to see the fish first hand. Jack was able to bring the pupils out in small groups to look at the fish close up in a bucket and he also lifted them out of the water briefly to see them from a side view. It was interesting to se how they were camouflaged from the top and that the female fish was bigger than the male due to the huge number of eggs which she carries. We heard more about the project being undertaken by Jack and he told us about the numbers of Sparling he had just recently found in the Cree River. We also got more of an understanding about how important this project is for Scotland. Today, a camera man came to film Jack talking to us. The footage will be used in a documentary highlighting the importance of the project and will be shared amongst wildlife experts at conferences and for use in further research work as a reference tool. Jack was very impressed with the amount of information Mrs Dyson’s Primary 5 class had retained from his last visit and with the sheer number of relevant questions the pupils were coming up with. Lots of hands kept going up, eager to know more!

Today, Primary 5 together with our Eco Group were delighted to welcome Jack Wootton into school to talk about a special project which he is working on behalf of Galloway Fisheries Trust. Our young learners were very interested to hear about how the Sparling are endangered, having once been in 15 Scottish rivers, they now survive in only three. One of these rivers is The Cree.  Mr Wootton explained how sensitive the fish are to any conditions which might change the environment of the river they are living in. We heard about water dams, pollution and intense fishing all being issues affecting the species. We also learned about the life cycle of Sparling including where they spawn, how they are washed down to estuaries and then their movement back up rivers when conditions are best. Mr Wootton is working to safeguard the Sparlings’ existence in the Cree and is also looking to introduce the fish back into other suitable rivers. The children learned about how important it is not to make detrimental changes to our eco system. It was interesting to hear that, historically, that the River Urr once had Sparling too. The children were also intrigued to learn that the fish smells like cucumber, that its body is transparent when looked at from the underside and that some eggs are so small, they are less than 1mm in diameter. The children were asked for suggestions about how we can safeguard this species in Scottish rivers for the future and there were many good ideas put forward. Our Eco Group and Primary 5 are very keen to been involved in this project as it continues over the next few months and to track its progress. The children were also excited to hear there was possibility that Mr Wootton might be able to bring in some real live Sparling for us to look at!  We are very grateful to Mr Wootton for his interesting talk: many of our young people found his enthusiasm for his work very motivational and he may even have inspired some of them to pursue careers in safeguarding wildlife in the years to come! 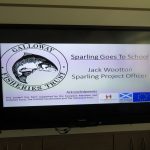 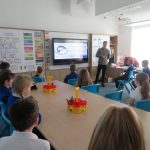 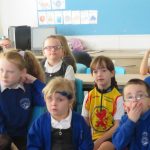 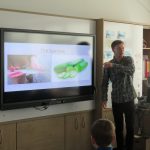 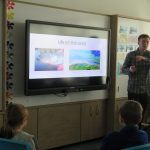 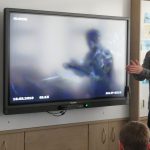 Thank you to everyone who braved the weather conditions to come into school early today for our Fairtrade Breakfast. We had 82 people attending which is a super turn-out in our bid to share awareness of Fairtrade food items.  Activities such as these help us to retain our Fair Achiever status for our school. We are very grateful to assistance from Mrs Houston from Dalbeattie’s Hospitality department and the school kitchen and also to Mr Parker, Mrs Dyson, Mrs Cox, Mrs McMinn, and Mrs Robison for all their help. And of course we are so grateful to Kinnairds, Dalbeattie Co-op and Tesco Castle Douglas and to Mary Van Zwanenberg from the Kirkcudbright Traidcraft Group for supporting our event with donations of Fairtrade food items. Here are just a few of the pictures from the event. Any profits raised is going towards purchasing Fairtrade footballs to help to continue to spread awareness. 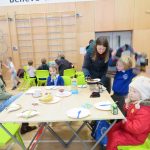 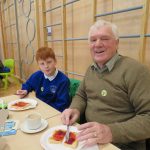 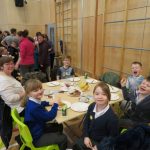 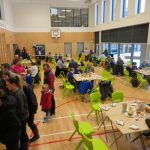 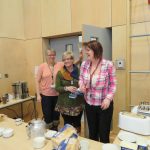 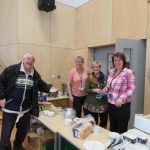 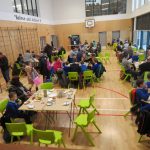 Today, we were delighted to have two representatives from Dalbeattie High School, along with our own Eco Group at a special presentation given by Mrs Dyson, our Primary 5 teacher. Mrs Dyson has been very busy, over the last few years, planning a range of Fairtrade activities with her Primary 5 class and eco group as part of our ‘Fairtrade Journey.’ Mrs Dyson first outlined the activities, comprising mainly of an audit of staff and pupils about Fairtrade products,  which were undertaken to achieve the ‘Fair Aware’ award. She then explained the activities which followed before we were awarded the ‘Fair Active School’ award in 2015: presentation to local community and Fairtrade snacks at an afternoon tea amongst many others.  Then in 2017, the school was awarded the ‘Fair Achiever’ award following still more activities which included a Fairtrade Breakfast and whole school assembly with a  Fairtrade representative. Since then , the Primary 5 class has also organised a Fairtrade games afternoon and a Fairtrade morning break time staggered over two days and met with a company who supply Fairtrade school sweatshirts so that these can be offered also to parents to buy complete with school logo. This week finds us in DGlife as we prepare for our next Fairtrade Breakfast next week on Thursday 1st March. Thank you to all who have already shown support for this event by buying tickets and to the local businesses (Kinnairds, Co-op and Tesco) who are supporting us with donations of Fairtrade food items.

On Thursday 31st August, the Eco Group went on a trip to Tongland Power Station and The Dee Hatchery. At Tongland, the group was learning about renewable energy using hydro power. We found out about the dam system on ‘The Dee’ and visited the turbine hall to find out more about how electricity is generated. We got to walk along the actual dam at Tongland and saw the gate being opened to see the force of the water rushing through. We also saw the fish ladder where the salmon move up river when they return from the Atlantic, back to their spawning ground.  Later in the day, the group moved onto the Dee Hatchery at Shirmers Burn where we watched the Galloway Fisheries Rangers undertake some electro fishing. The fish were put into buckets for us to look at more closely and handle. Some of the group members were even brave enough to handle the baby North American Signal Cray Fish. The salmon and trout were returned to the burn afterwards but not the cray fish as they are not native to the Dee River system! The group is very grateful to Tim and especially to Rowan who has worked so closely with the group over recent years.