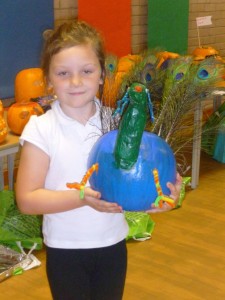 On Friday 30th October Port Ellen Primary had a Halloween pumpkin competition. It is when everyone in the school can carve a pumpkin at home then bring and it in to school and enter them into a competition to find out who has won. There is a winner in every class and when you find out who has won the competition they stand up in front of the school and get a picture taken and a prize. The winner in pre 5 was Chloe she made an amazing owl with lots of eyelashes, in primary 1 the winner was Roman and his little sister Skyla but Skyla is in Pre 5 they made a pumpkin together. The winner in p2 was Phoenix when she found out she had won the costume competition and the pumpkin competition she was very happy.  The winner in p3 had made a lovely peacock wit lots of feathers. The winner in primary 4 was Ellen and she made a sugar skull with lots of detail in it, the winner in p5 was Taylor he made a pumpkin park with a dinosaur inside a cage. The P6 winner was Natalie and she made a trick or treat pumpkin and the treat was a pumpkin cake, the trick was a pumpkin with icing bugs on it and with the word TRICK in middle. The p7 winner was Joe and he made a pumpkin house. All the winning pumpkins go to Ian Lorries in the window so that everyone in the village can see them.