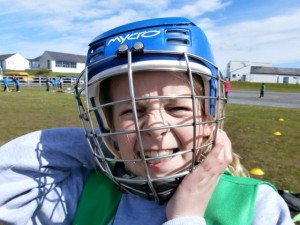 On Monday 20th May, a group of 5-7s went to a Shinty developer to see if we were good enough to go to the tournament in Fort William and I think we got through. I really enjoyed it. We did different types of drills; passing drill, shooting and speed it was fun. We had a tiny break then we started to play a game at the very end and we had a massive game and it was 8 minutes a half. The developer said I was really good at dribbling with both sides of the stick. The best thing was the different drills i feel so much confident than I was before about Shinty. I have learned  how you hold your stick in the ready position. In one of the drills we hold the stick on the ready position and the hit the ball on one of the sides. It was awesome but it was wooden sticks so if you hit someone in the shins it would really hurt badly.