Every Thursday after school every one in the choir go to the hall for practice. On Saturday 2nd June all of the choir went to Bowmore to the local mod. They sang the unison, unison 2, strathspey, reel and the peurt a ‘beul. They came first for the unison and second for the strathspey and reel. They won two trophies, one for the Psalm and the other trophy was for their unison. The choir said “Yeah we came first!” Then Mrs Macdonald the conductor said “We won.” They all had fun. 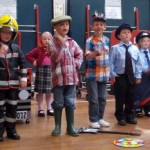