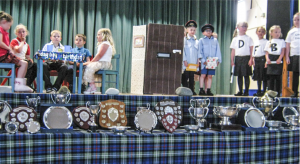 On Saturday 4th June Port Ellen Primary School choir went to the Local mod on Islay.  The mod was held in the high school in Bowmore. The choir won the unison and came 2nd in the peaurt a bheil.  Also ten people from the choir won the psalm. For the unison you have two songs and in our first song Mrs Macdonald made a mistake so we thought there was no chance of us winning but with our second song, Latha Math, we did really well and we got high marks for Gaelic and music from the Judges which meant we won.  Lots of individuals did well also- Rowan was covered in gold medals!  The Primary 1-3 class also did a fab action song.  We really enjoyed taking part and improving our Gaelic.